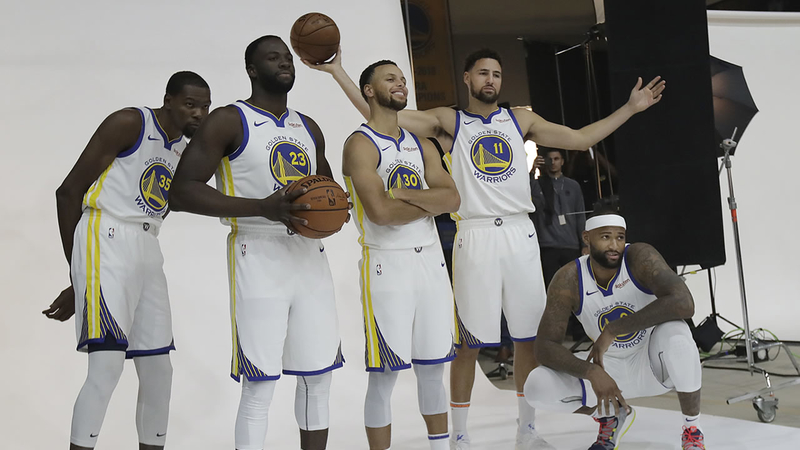 OAKLAND, Calif. (KGO) -- The Golden State Warriors are back! They met the media on Monday, feeling refreshed after an NBA title that Draymond Green said was the hardest thing he's ever done in his life.

The team's focus is clear for the upcoming season.

The Warriors' latest championship banner already hangs in the rafters, last season behind them. They head into this season, their final at Oracle Arena, knowing their future is uncertain.

"Nothing lasts forever in this league. We've always said we want to keep this going as long as we can and we're right in the thick of it," Stephen Curry said.

"You just have to enjoy the moment, enjoy the now, because there's going to be so much speculation as to what's ahead. Nobody knows what's ahead," Coach Steve Kerr said.

But the addition of another All-Star starter, as well as infusion of younger players, keeps the challenge this season fresh. Even for a two-time NBA Finals MVP.

#Warriors @StephenCurry30 :
“Nothing lasts forever in this league, but we’ve always said we want to keep this going as long as we can, and we’re right in the thick of it.” pic.twitter.com/Xcluk1TucF

"We're all smart players, we all know how to play the game. We've got basketball masters on this team that know exactly what to do in certain situations. And I think DeMarcus is one of those basketball geniuses that knows exactly who he is and what he needs to do to be effective," Kevin Durant said.

"My drive has only increased, I'm seriously like a mad man right now. On paper it looks great, of course we've got to go in and put the work in but the potential is scary for this team and it's on us to bring this potential out," DeMarcus Cousins said.