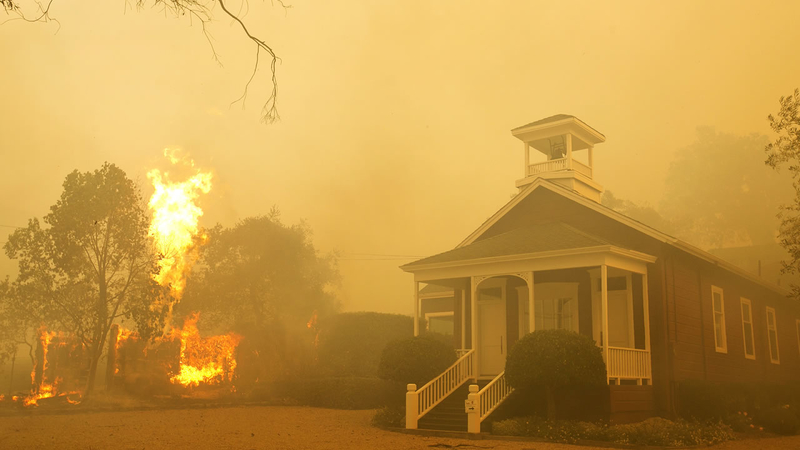 SONOMA COUNTY, Calif. (KGO) -- No one could have predicted that reports of wildfires in the North Bay would lead to such widespread devastation -- homes, businesses, livelihoods gone.

Ten people have been confirmed dead as firefighters continue to risk their lives rescuing those in harm's way. Officials in Sonoma County received 100 missing person reports. Hospitals in Northern California have treated more than 150 patients related to the fires. To report a missing person or receive updated information, call 707-565-3856.

Glen Ellen is just one of the many North Bay towns that has been affected by these powerful, seemingly unstoppable fires.

Officials say the total amount of acreage scorched across the North Bay has surpassed 70,000.

The fires broke out nearly simultaneously and then exploded overnight, sending residents fleeing as embers rained down and flames raged around them. Two hospitals in Santa Rosa, the largest city in the region with 175,000 people, were forced to evacuate patients.

The flames were fickle in some corners of the city. One hillside home remained unscathed while a dozen surrounding it were destroyed.

One of the homes that was reduced to ash had a Mercedes Benz in the garage. Two cars parked across the street were untouched.

The flames were unforgiving throughout the city, torching block after block with little to salvage.

We won't soon forget the images from these fires in the North Bay: https://t.co/e9cuLlcqe6. pic.twitter.com/9R2f9vT6xE

Hundreds of homes in the Fountain Grove area were leveled by flames so hot they melted the glass off of cars and turned aluminum wheels into liquid. One neighborhood of older homes was scorched, leaving only brick chimneys and downed power lines.

Residents who gathered at emergency shelters and grocery stores said they were shocked by the speed and ferocity of the flames. They recalled all the possessions they had left behind and were lost.

"All that good stuff, I'm never going to see it again," said Jeff Okrepkie, who fled his neighborhood in Santa Rosa knowing it was probably the last time he would see his home of the past five years standing.
His worst fears were confirmed Monday, when a friend sent him a photo of what was left: a smoldering heap of burnt metal and debris.

In the rush to leave, Okrepkie and his wife were able to gather important documents, photos and mementos, like letters from his wife's late father. Still, Okrepkie was tortured by the things he left behind, including a framed photo of his grandfather that his grandmother had carried with her for a decade after he died.

Some of the largest of the 14 blazes burning over a 200-mile region were in Napa and Sonoma counties, home to dozens of wineries that attract tourists from around the world. They sent smoke as far south as San Francisco, about 60 miles (96 kilometers) away. The causes of the fires were unknown.

The fires throughout the region were among the deadliest in California history, and fire officials expected the number of fatalities to increase.

Winds have posed a challenge to firefighters in the state this year despite a relatively wet winter that followed years of drought. The fires that broke out Sunday burned "at explosive rates" because of 50 mph winds, said Ken Pimlott, director of the California Department of Forestry and Fire Protection.

October has generally been the most destructive time of year for California wildfires. What was unusual Sunday, however, was to have so many fires take off at the same time.

Gov. Jerry Brown declared a state of emergency in Napa, Sonoma, Butte, Lake, Mendocino, Nevada and Yuba counties. Authorities imposed a sunset-to-sunrise curfew in Santa Rosa, saying they were on the lookout for looters.

The ferocity of the flames forced authorities to focus primarily on getting people out safely, even if it meant abandoning structures to the fire.

Elsewhere in the state, a fire churning through canyons in hilly neighborhoods of Orange County burned at least half a dozen homes and forced residents of about 1,000 homes to evacuate. Brown also declared a state of emergency for Orange County.

The inferno in Northern California blackened miles along Highway 12, one of the main gateways into wine country.

The fires also damaged the Silverado Resort in Napa and a Hilton hotel in Santa Rosa.
Kim Hoe, a 33-year-old tech worker from Penang, Malaysia, was staying at the Hilton Sonoma Wine Country, which was gutted by flames. He said the power went out around 1 a.m., and he and his colleagues started packing up when someone knocked on the door and told them to run.

"We just had to run and run. It was full of smoke. We could barely breathe," Hoe said.

They returned in the morning to find the hotel had been destroyed along with most of their possessions. Hoe was relieved he had taken his passport and a few essential items.

The fires knocked out power to thousands of people in Sonoma and Napa counties. At least 50,500 people were without power in Sonoma County alone.

Firefighters rushed to a state home for the severely disabled when flames reached one side of the center's sprawling campus in the historic Sonoma County town of Glen Ellen. Emergency workers leapt from their cars to aid the evacuation.

Crews got the more than 200 people from the threatened buildings, one firefighter said, as flames closed within a few dozen feet.

Mike Turpen, 38, was at a bar in Glen Ellen early Monday when a stranger wearing a smoke mask ran in and yelled that there was a fire. Turpen raced home through flames in his Ford F-250.

"It was like Armageddon was on," Turpen said. "Every branch of every tree was on fire."

He stayed to try to defend his own rental home.

By late morning, Turpen, wearing shorts, a kerchief mask and goggles, was the last man standing for miles along one abandoned road. His yard and all those around him were burned, smoking and still flaming in a few spots. But his home was still standing.


IMPORTANT: If you are in need of resources, shelter, or assistance please click here -- and we will continue to update this page for resources and complete updates on road closures, school closures, and evacuation orders.