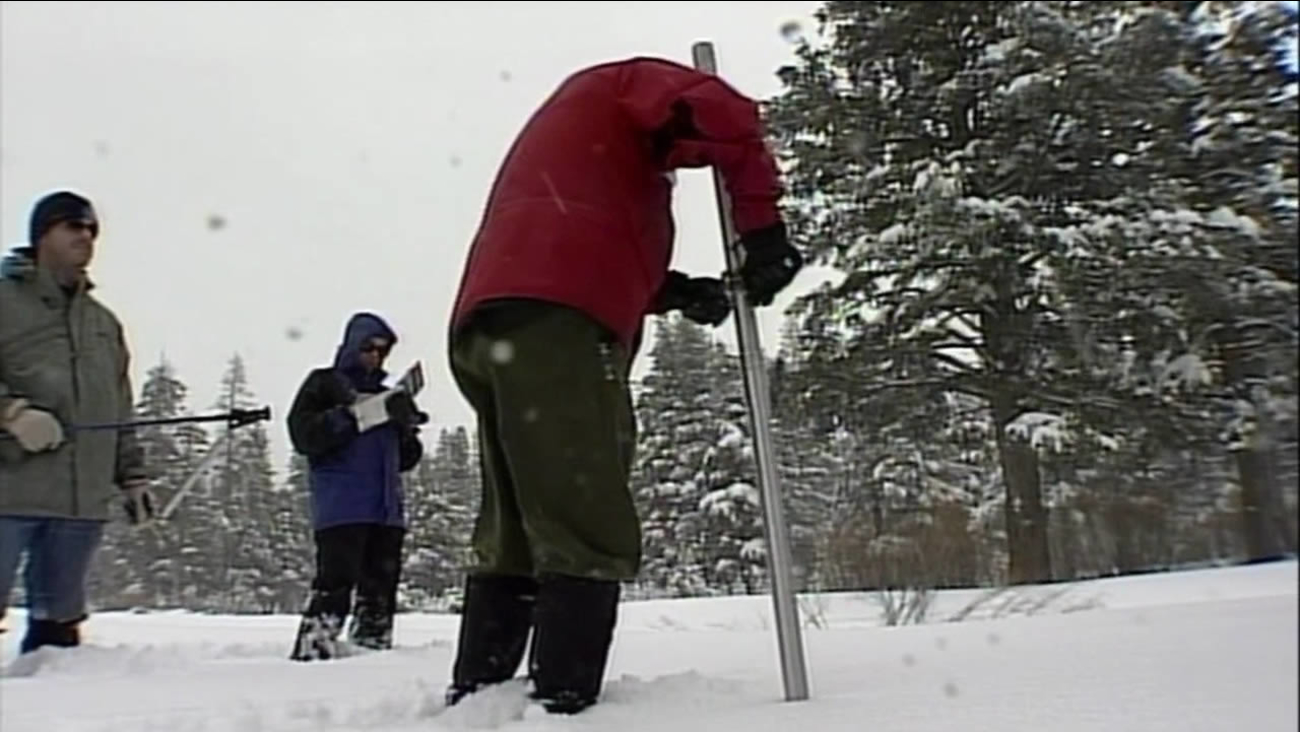 KGO
FRESNO, Calif. -- The Sierra snowpack in drought-stricken California measured at 32 percent of normal Tuesday at a time of year when it's supposed to be at its peak, the state's Department of Water Resources announced.

Even the storms dousing Northern California through Wednesday morning are expected to spell little relief this coming summer for farmers and many communities already facing restrictions, said Mark Cowin, the department's director.

Farmers are deciding to leave fields unplanted, and some cities are scrambling to find water supplies, said Cowing, adding that California's "storm window" is closing.

"We can hope that conditions improve," he said. "But time is running out, and conservation is the only tool we have against nature's whim."

State surveyors travelled up the High Sierra to take their monthly measurements of the snowpack. California's wet season has another month to deliver, and on May 1, surveyors are scheduled to make their final trek of what officials considered a gloomy season.

The Sierra Nevada snowpack is important because it stores water that melts in the spring as runoff. Communities and farmers depend on it during California's hot, dry summers. California is in its third consecutive dry year, and in January Gov. Jerry Brown declared a drought emergency.

In addition to the snowpack figures, authorities said Tuesday that they are trying to capture the runoff from the recent rainfall to be stored for use later.

Cowin and his colleagues in state and federal agencies said in a briefing with reporters that they have decided to temporarily boost the water pumped from the San Joaquin Delta for storage in reservoirs during the next week - or possibly two - depending on the amount of rain that falls.

The added pumping won't violate strict regulations protecting endangered salmon and other fish in the Delta, and it won't cause salty ocean water to flood back into the Delta, he said.

Many Central Valley farmers will get no irrigation water despite the pumping because there's not going to be enough to go around, officials said.

California's reservoirs are also low. Shasta Lake north of Redding is at 48 percent of capacity, and the San Luis Reservoir near Los Banos is 42 percent full.

A recent storm began with rain Monday at lower elevations and snow blanketing the Sierra Nevada in a system that is expected to deliver up to a foot by early Wednesday. Forecasters for the National Weather Service said some places at high elevations may get 2 feet of fresh snow. That is not enough.

Charlton Bonham, director of California Department of Fish and Wildlife, said that the challenges faced by state and federal officials are balancing the regulations protecting fish and wildlife of the Delta, providing farmers and communities with water and keeping a strong enough flow moving that saltwater doesn't back up.