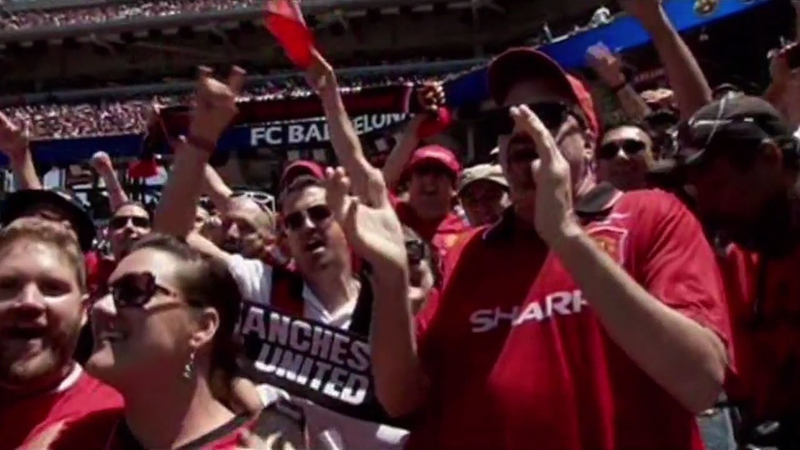 SANTA CLARA, Calif. (KGO) -- It was a rare opportunity for soccer fans as European soccer giants Manchester United and FC Barcelona took the field in a sold-out game at Levi's Stadium Saturday.

FT: Barca 1 United 3. Rooney, Lingard and Januzaj score to make it three wins out of three on #MUtour. pic.twitter.com/X9idhQ7Al6

Wayne Rooney scored on a header in the eighth minute off Ashley Young's corner kick, and Manchester United kept the pressure on all afternoon to beat Barcelona 3-1 on Saturday and stay unbeaten during its preseason tour in the United States.

Fans said they wouldn't have missed the game for anything but many had a difficult time getting there.

Barcelona fans were waving the flag outside Levi's Stadium. Barcelona fan Johnny Koponen and his friends from Sacramento were ready for battle. "Once-in-a-lifetime to watch Barcelona play against Manchester United," he said.

"You don't see this unless you're in Europe. We're here to support. Our team, Barc all the way, we're going to get this 3 to 1," Barcelona fan Christian Esqueda said.

The two soccer world giants met in the Bay Area for this friendly preseason game.

Three Manchester fans came from Huntington Beach. Dennis Cusnick wears his team pride forever tattooed on his arm. "Manchester United all day long, it's all about the Red Devils," he said.

"It's overwhelming, it's so amazing to have watch them on TV and now we're in the same space with them, I feel like a kid on Christmas," Manchester fan Stephanie Pearce-Owen said.

But many fans say just getting there was tough. There was traffic and long lines at security games.

"We were late for the game, and they organized everything bad," Barcelona fan Jose Enriquez said.

"They need to get their stuff together, real hassle," fan Ivan Najera said.

But fans inside felt lucky just to have a ticket, as the game was sold out.