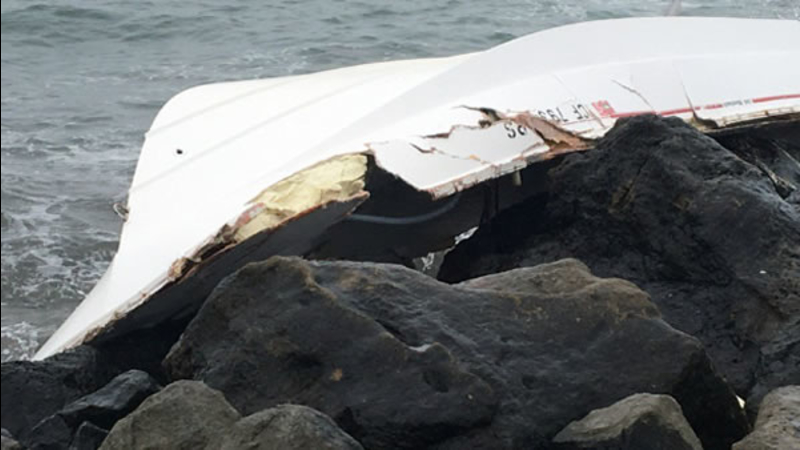 HALF MOON BAY, Calif. (KGO) -- It's foggy, rainy and blustery at Maverick's on Thursday. Even though a start date for the surf contest has not been announced, big waves are crashing and some surfers are out practicing.

Two men in a small boat came out to watch and almost didn't go home.

Their small boat, a 19-foot Boston Whaler, sits upside down, wrecked on the jetty, still being battered by crashing waves.

The Harbor Patrol says at about 10 a.m. Thursday, the boat was near Surfer's Beach as waves of up to 18 feet in height were rolling in every 20 seconds.

We talk to a surfer who was in the water and watched a wave flip this boat over. pic.twitter.com/BBF3NcloPR

One of those waves flipped the boat upside down, spilling the occupants into the water. They were not wearing life vests and were fortunate they weren't seriously hurt or killed.

Deputy Harbormaster Cary Smith said, "When a boat overturns, most of the time someone gets stuck underneath the boat or gets bumped in the head by something that is on the boat as it goes over. They were lucky to get away from the boat and not have any of that happen."

Local surfer Ben Andrews was on his board out on the water when it happened. He says, "That particular wave, there was a big set and everybody had to scramble out of the way, and there was nothing they could do."

Other nearby boats pulled the men out of the water. They were wet and cold but refused medical help. The Harbor Patrol is watching the boat to make sure none of the fuel contaminates the water.

The deputy harbormaster says this was not a day to be out in a small boat unless you really know what you're doing.