KGO
By by Cornell Barnard
SAN FRANCISCO (KGO) -- After Saturday's pounding rain and heavy winds, many are bracing for Sunday's second storm. The Bay Area will be hit with more rain after Saturday's massive storm blew through causing damage across Northern California.

"It was like a freight train coming through!" said Garth Yeaman of Saturday's storm.

It was a scary night for many as El Nino made a big comeback Saturday bringing buckets of rain and heavy winds.

"It blew a shingle off my roof. The power even went out for a few minutes," said Betty Fabiani, a Pacifica resident.

Betty Fabiani and her niece Lisa Raygosa live in Pacifica where the storm hit hard and brought down utility lines.

"It was scary actually. We were outside but came back in because it was too much," said Raygosa.

The storm churned up big swells along the Pacifica seawall, attracting lots of onlookers.

Strong winds blew down a chain fence near the demolition site of a red-tagged cliffside apartment house on Esplanade Ave. Weather has delayed the project.

"We first thought we'd demolish it tomorrow, but because of the tides and swells, we've put it off until Tuesday," said Pacifica City manager Lorie Tinfow.

A test project by the city of San Francisco to keep water out of homes and businesses near 17th and Folsom streets involves flood-stop barricades filled with recycled water.

The next test for the floodwalls will be Sunday night, when the storm arrives.

River levels have started to subside, and the San Lorenzo River, Soquel Creek and Corralitos Creek are all back below flood levels, according to county officials.

The flooding caused evacuations for residents living west of Porter Street along Soquel Creek, in Felton Grove and at Paradise Park along the San Lorenzo River.

There were several structures impacted by the flooding, and several county roads were closed due to mudslides, floods or downed trees.

American Red Cross evacuation centers have been established at Jade Street Park in Capitola and at the Zayante Fire Station.

In western Sonoma County a large redwood tree destroyed a home, narrowly missing the woman inside.

The incident happened at around 6 p.m. Saturday night on Hampton Way in Occidental. The homeowner was with her two dogs when she saw the tree falling and quickly ran outside. She is currently staying with friends.

PG&E reported 56,000 people were without power on at the height of Saturday's storm.

The rain and winds delayed more than 320 flights and cancelled 70 others Saturday at the San Francisco International Airport. There were 16 delays at the Oakland Airport and 13 at Mineta San Jose Airport. Problems could continue Sunday so check airlines before heading out the door.

The Associated Press and Bay City News contributed to this story.

#Lafayette residents along Via Roble & Quail Ridge Rd. have been without power since 8:45 last night. #abc7now pic.twitter.com/iJ8Xjc0Sua

#Lafayette neighbor points out power lines that fell on her driveway. Worried about elderly neighbors who r trapped. pic.twitter.com/413epvn1Br

PG&E crews have arrived in #Lafayette to restore power in hills where tree took down power lines. #abc7now pic.twitter.com/EE1MCqxuny 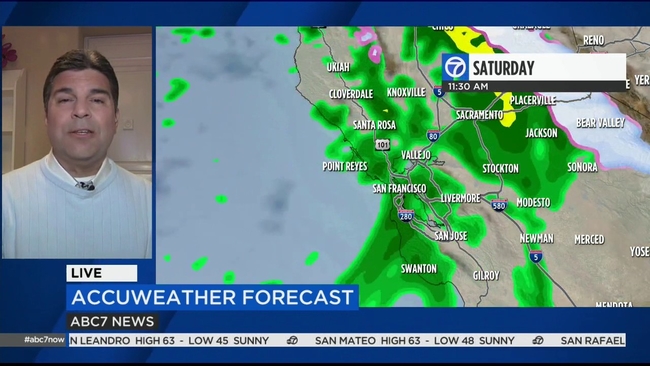 AccuWeather forecast: Rain on its way to the Bay Area this weekend