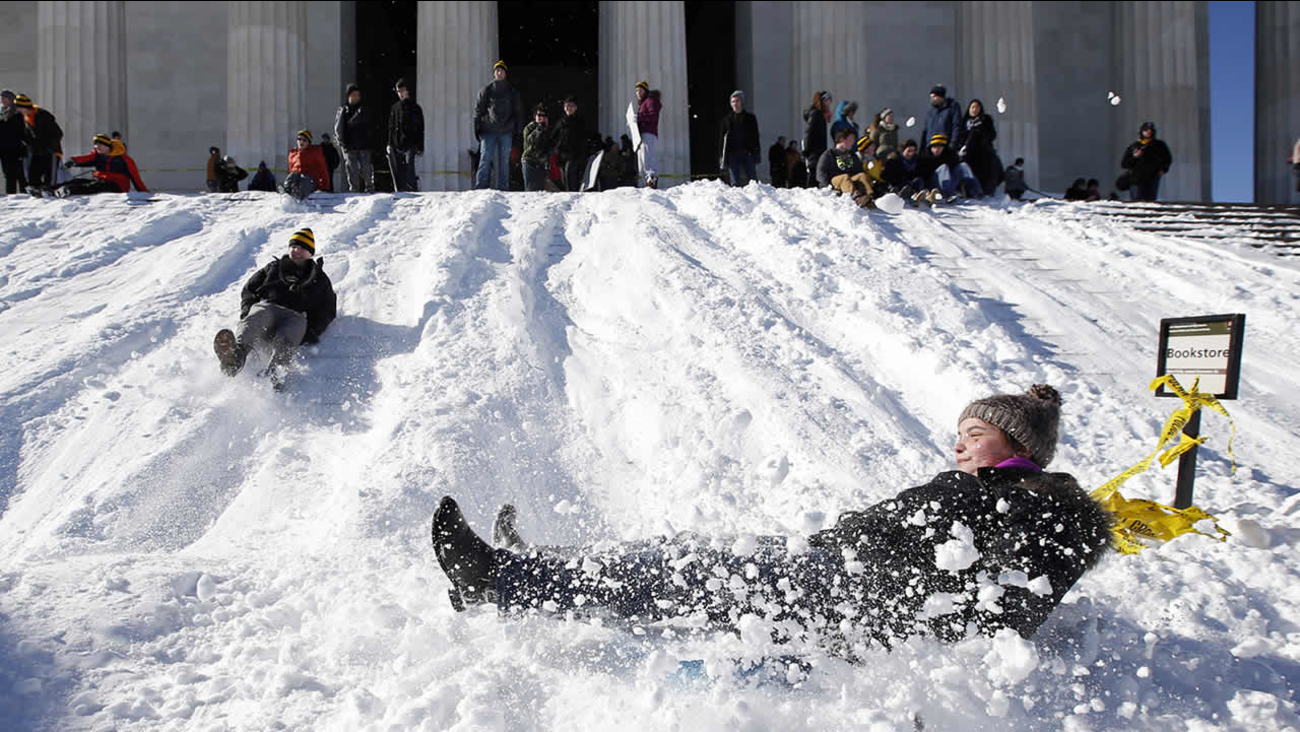 A woman bounces at the bottom as she sleds down the snow-covered steps of the Lincoln Memorial, Sunday, Jan. 24, 2016 in Washington. (AP Photo/Alex Brandon)

After a weekend hunkering down at home during a blizzard, East Coast residents are trudging into the workweek today on slippery roads amid mounds of snow that buried cars and blocked sidewalks. Click here for the latest stories and videos of the storm.

Here's a look at some of the best photos and videos of the snowstorm that have been posted to social media.

One of the best videos to come out of the blizzard -- Tian Tian the panda at the Smithsonian National Zoo frolicking in the snow! Here's a look at video posted on Monday.

And here's the video posted over the weekend.

And spotted in Washington D.C. - Chewbacca from "Star Wars!"

The snow wasn't all bad. Some people made the best of it, like this person who jumped into the snow while wearing shorts and a tank top!

This guy had the good sense to jump while in a snowsuit.

Or these cars spotted in New York.

Meanwhile in Brooklyn, residents held a dance party outside.

Pete Souza, the White House's official photographer, posted some snowy images on Instagram. This is what the South Lawn looked like on Sunday.

Here's a look at a snow-covered tree in the First Lady's garden.

And here's the Rose Garden.

Crews are hard at work trying to clear roads.

And the sun is shining as the digging out continues.

The snowstorm didn't stop the small group of soldiers who continually stand guard at the Tomb of the Unknowns at Arlington National Cemetery. Click here for the full story.


Even in the roughest weather, the Naked Cowboy is committed to doing what he does best in New York's Times Square.

This timelapse video posted to YouTube shows the incredible amount of snow that fell overnight in Virginia.

Here's another timelapse video from Friday afternoon through Saturday night showing snowfall at the Navy Yard area of Washington D.C.

What to do when you're snowed in? Build a really cool snow fort.

Or take slow-mo video of a snowball fight.

What to do after the blizzard of 2016. SLO-MO SNOWBALL FIGHT! pic.twitter.com/b9bEGANemq

Residents and law enforcement took the severe weather in stride. This Twitter video shows a police cruiser blasting a song from the hit Disney film "Frozen." Listen -- can you guess which song it is?

Wait, is that Frozen soundtrack coming from the police cruiser? Yes, yes it is. pic.twitter.com/522pQUbziX

As snow fell heavily in Washington D.C., residents took to the streets with sleds, snowboards, inner tubes, and skis.

Others used the snow to take silly photos and complete dares.


Thousands of flights have been cancelled because of the blizzard. Here's a look at planes buried in snow at John F. Kennedy International Airport.

The snow has turned into pleasant playtime for animals. Here's a look at deer frolicking in Washington D.C.'s Cleveland Park.

The heavy snow has prompted many to play a game of -- where did the car go?

And here, can you tell what this is? It's a convoy of snowplows in West Virginia.

A blizzard like this means all hands on deck. The DC Police Department tweeted a photo showing the police chief giving some motorists a hand.

And here's a look at Gov. Cuomo assisting a stranded driver.

Why walk when you can strap your dogs to a sled and glide through the streets of Washington D.C.?

Or even snowboard down your street!


Navigating stairs on the subway was tricky on Saturday.

subways open for now but the stairs? i navigated them to get to work .. on air 2-5pm @ABC7NY pic.twitter.com/M8x94pFfQq

Parts of the East Coast are also seeing severe flooding.

Can you tell the waters pretty high🌊 welcome to the shore...wanna take a swim🏊🏽 pic.twitter.com/yY5iYBknTk

The snow fell heavily and quickly. This timelapse video shows the snowfall in Pennsylvania.

This person posted a video to Twitter and said, "When you can't make practice because of the snow and ice @swimswamnews @SwimWithIssues."

As many people hunker down to ride out the blizzard, this flight attendant is celebrating because she's "happy" to leave Washington D.C. for better weather.

You know it's serious when taking the dogs out for a walk involves ski equipment.

Be prepared! Brett Yoh took this photo of a sign in Baltimore warning residents to plan ahead.

Why walk when you can hitch a ride in a canoe strapped to an SUV?

Since a Trader Joe's in Washington D.C. reportedly locked their doors because of too many people in the store, people flocked to this Safeway where lines extended down the aisles.

Other photos are showing empty shelves as people stock up on milk...

At Chicago O'Hare International Airport, a plane from San Francisco slid off the runway. Click here for the full story.

Crews at O'Hare were busy earlier in the day trying to clear snow off the runways.

This YouTube video from Patrick Grzywa gives us an even more in-depth look at snowplows hard at work in Chicago.

A video posted to YouTube by Depth of Field Productions gives us a unique perspective of the snowstorm that hit eastern Tennessee and blanketed Neyland stadium.

An Instagram video shows a dog enjoying the snow in Nashville.

Also in Nashville, Marisa took timelapse video of a person attempting to shovel a walkway as snow continued to fall heavily around him.

Meanwhile, in North Carolina, Kelly D. took a timelapse video of the snow falling in her backyard.


Click here for full coverage on the 2016 East Coast blizzard.