Wind gusts of more than 100 miles per hour sounded like an angry animal to one resident. Another said it was so windy he couldn't breathe.
KFSN
By Corin Hoggard 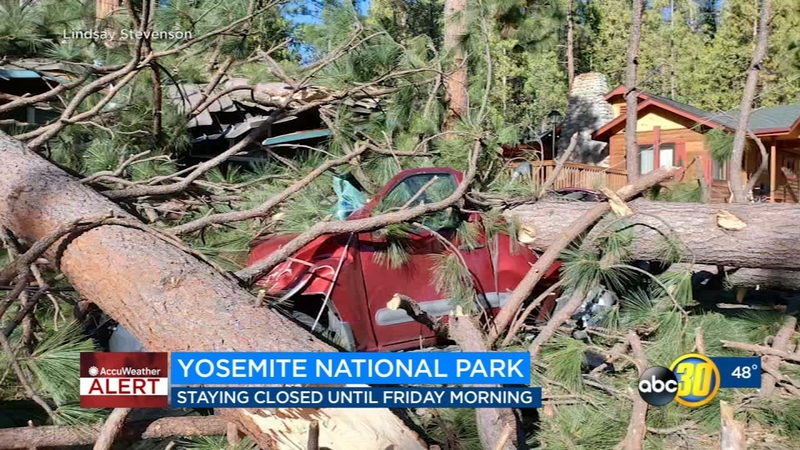 The winds also led to the closure of Yosemite National Park.

Caltrans blocked Highway 41 on the way to Yosemite because windy conditions made it too dangerous even if crews could've cleaned up all the trees already knocked over.

The park is expected to remain closed until Friday morning.

Yosemite will likely remain closed until Friday morning as the park conducts damage assessments, repairs facilities, and clears trees. While some facilities have been damaged, no injuries have been reported as a result of the high winds in the park.

In Bass Lake, a perfectly healthy 100-foot pine tree moved indoors at Don Mandy's house as he typed out a Facebook message to friends about wild winds keeping him awake.

"It sounded like an earthquake," he said. "I've lived through earthquakes. And it just, the house did like this, thud, and then I just said 'woah, that's a tree.' And I looked up and I saw the damage and I was like 'welp, gotta go.'"

Mandy said the wind was so bad he couldn't breathe outside.

So when a second tree fell through his roof, he and his wife took cover inside, but upwind from the airy living room, office, and bathroom.

Strong winds left a path of destruction in the Valley overnight Monday and into Tuesday and led to the closure of the Yosemite National Park.

Wind gusts of more than 100 miles per hour sounded like an angry animal to Mark Holland.

"Just roaring," the Oakhurst resident said. "It was just roaring all night. This is still a big wind here now."

Some street lights are out in Oakhurst, a few businesses closed for the day, and schools moved to online-only classes or gave kids an extra day off.

Matthew Broadley of Coarsegold said the winds tore through his home and event venue Double B Ranch on Monday night.

"It really sounded like a freight train," he said. "When it would gust it would whistle and howl."

"I woke up to a complete disaster," he added.

The sheer force of the gusts split a large tree in half that fell on Broadley's driveway.

It left him and his family stuck.

Kent Tracy, the owner of Advanced Tree Service in Oakhurst, did some of the cleanup around town.

He also gave some people a helping hand.

"We put an alert on Facebook, 'Hey, if you need your driveway cleared, just call me and don't worry about money'," said Tracy.

Tracy said if it wasn't for Public Safety Power Shutoffs the damage could have been catastrophic.

"If they had not done that, this would be another Paradise," he said. "That would be my guess."

Power lines fell down across the area. Trees took out several of them and it is unsafe in a lot of the Oakhurst, and Coarsegold, and Bass Lake area.

Winds fueled a pair of small fires near Don Mandy's house in Bass Lake, but damage was minimal.

But PG&E is trying to get things back to normal.

It now has hundreds of crews working to restore electricity in impacted areas.

More than 2,000 customers in Mariposa County were still without power Tuesday night.

At the moment there is no estimate for when power will be restored to some areas.

As for the cleanup efforts, those could take days up to a week.