KGO
By Lyanne Melendez
SAN FRANCISCO, Calif. (KGO) -- Residents in the East Bay took advantage of a beautiful lake in Tilden Regional Park in the Berkeley Hills on Friday. Lake Anza was filled with families enjoying the sandy beach and the cool water on this gorgeous summer day.

Friday was forecasted to be the hottest day this week as temperatures rose throughout the Bay Area.

More than 25,000 participants have signed up for this Sunday's San Francisco Marathon. People from all over the United States and the world are here.

"Just the heat by itself, I think people come here expecting a cooler race day. Luckily, the race starts really early so hopefully we will avoid a lot of that heat, but it's going to be hot," Lauri Abrahamsen said.

"I'm used to it, I'm used to the heat and the humidity from New York, so hopefully cooler experience for me, but just hydrating and resting, just doing what I do," Kim Hotarek said.

Thomas Murray is running a double marathon and the first one starts at midnight.

"After the first one, I'll go back, shower, change, re-hydrate, kind of massage my feet and go down to start the second one," Murray said.

Charlie Foster heads a parent-child group called Brooklyn Forest, which encourages preschoolers to learn from being outside with nature. Hiking is one of their activities, but because of the heat, a lot of their time was spent in the shade.

It will be hot Saturday during the match between Spain's Real Madrid and Inter Milan of Italy. The game will take place at Cal's Memorial Stadium.

Temperatures are always high in Gilroy during the summer. However this year, organizers of the Garlic Festival have added canopies and misting stations to help cool off those attending the event. Also this year, there's a new downloadable app to help people find watering stations. 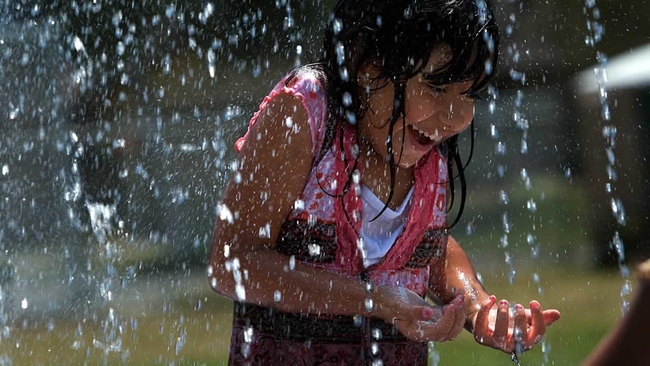