San Jose takes extra flood precautions ahead of next storm

San Jose takes extra flood precautions ahead of next storm

SAN JOSE, Calif. (KGO) -- The break we've had between storms has provided an opportunity for street maintenance crews to attack clogged drains that could lead to severe flooding with this next storm.

While calls have been coming in from worried San Jose residents, the clean drain effort started months ago.

Falling leaves can be a major cause of clogged drains and flooding. They create a formidable barrier that creates ponding.

San Jose's maintenance workers are out troubleshooting, responding to calls and spotting problems on their own. They say leaves are not always the problem.

"A lot of mud just builds up at the mouth of the drain, and what we do is we try to get our crow bar to loosen up the mud and usually that takes care of the problem," said San Jose maintenance worker Greg Martinez.

The Dept. of Transportation has been anticipating these issues. By next month, it will finish cleaning every storm drain in San Jose.

"We've got about 32,000 storm inlets that they've been cleaning since the summer, and then we actually go back and do a second round of cleaning in high traffic areas like downtown San Jose and low-lying areas like Alviso," said Colin Heyne from the city's Department of Transportation.

Emily Marzouk called the city this morning, fearing what this next storm could do.

"Sometimes it goes on the top of the garage," she said. She was relieved to see the maintenance crew clearing her drain and the one across the street.
The Valley Water District has pick-up stations across its service area where people can help themselves to pre-filled sandbags. That's what we saw San Jose resident Karina Yavorkovsky doing.

"I'm going to put them on the driveway to block water going under the house," she said.

RELATED: How wildfires create a serious threat for flooding and mudflows

Fast-rising creeks can also produce major flooding. Coyote Creek is well below flood stage now, but two winters ago, it spilled into the Rock Springs neighborhood, displacing an estimated 14,000 people from their homes and apartments. Aggressive vegetation management resulted.

"We've put more monitors in the rivers than we had before, as you learn from the past. We have more gauges and so on. Flood gauges and so on," said Richard Santos, chair of the Valley Water District board. 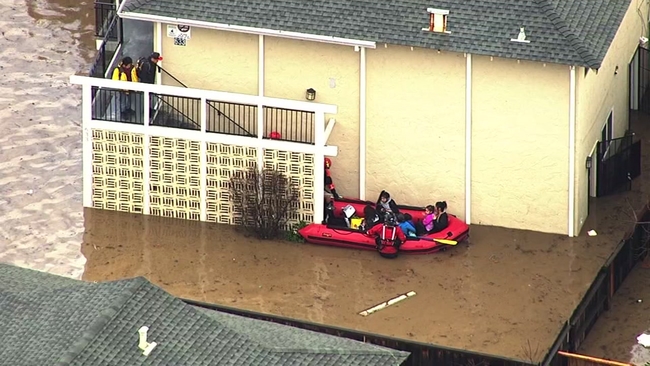