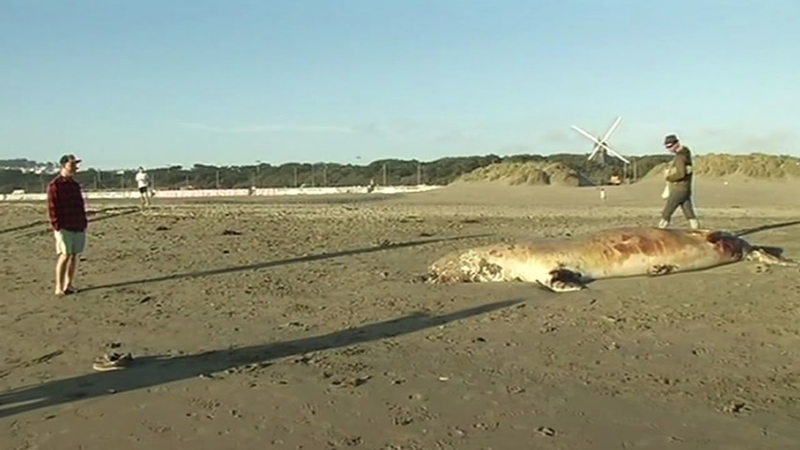 SAN FRANCISCO (KGO) -- There was a disturbing sight at Ocean Beach in San Francisco. Monday three large marine mammals washed up dead on the beach.

Joey Deruy took his usual walk along Ocean Beach near the Golden Gate Park windmills. At 3 p.m. he came upon a dead sea lion pup but kept walking. A few minutes later, he tripped upon the carcass of what appeared to be a huge elephant seal.

"So many dead animals, it felt really tragic," Deruy said.

Then a bit further down the beach he found a dead dolphin.

"Just so many, a variety of exotic animals dead like that I think is just very peculiar. Where the dolphin was, there was actually more dolphins... still swimming by the one that had died and beached," he said.

"They put the dolphin onto the beach patrol [truck] and then they drove it off. It took them about an hour and a half," he said.

By sunset people stopped to gawk at the elephant seal sprawled on the beach. The dead mammals raise many disturbing questions. Just this weekend, the National Weather Service meteorologists reported that Pacific Ocean temperatures off the beach are five degrees higher than average and could top off at a record-breaking 70 degrees by the end of this month.