What trees to cut down? Alameda grapples with decisions after tree fell on dad

KGO
By Leslie Brinkley
ALAMEDA, Calif. (KGO) -- One week ago, a tree fell on a dad watching his daughter play softball in Alameda. The city says he's recovering from serious injuries. Meanwhile, they are inspecting trees, as always, at many of their parks.

The park's manager pointed to a stump where a 60-foot eucalyptus tree was cut down, calling it, "guaranteed the safest tree in Alameda."

That tree was leaning toward a playground at Godfrey Park. This summer a eucalyptus leaning toward the rec center will also be felled. But across town at Washington Park, a Monterey Pine tree unexpectedly fell and crushed a father last Friday who was watching a ballgame from a picnic table, pinning him under the branches. The city says he'll make it but is still undergoing surgery.

Parks Manager John McDonald said, "I started getting nervous, based on calls I got, that people were getting tree removal happy."

He said they've had meetings this week but they don't want to overreact.

He says he had a list of problem trees but the 50-foot-tall Monterey Pine that toppled was not on that list. Seven other pine trees at Washington Park were removed over the last two years.

Maria Flowers watched her children play in the park, and said: "I love trees so it's a bummer to cut them down but for safety purposes I understand."

The city intends to prune some trees so the wind can better pass through the branches. They also advise park visitors to avoid walking under big trees during big storms. McDonald said " to have great parks you're going to have risks and it's our job to minimize them. " The trees he said are what makes a park a park. 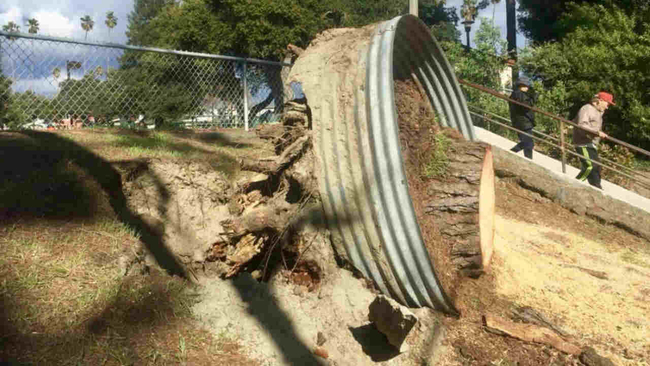