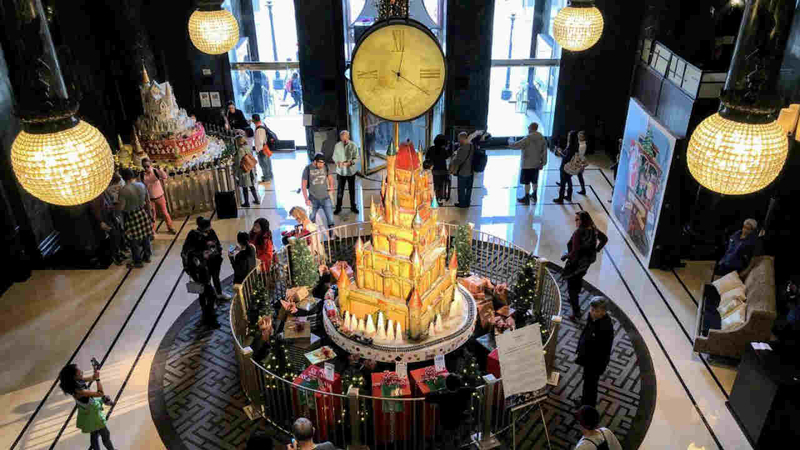 Every holiday season, the towering castle that slowly revolves under spotlights in the lobby of the Westin St. Francis gets a little bit bigger -- and somehow, the hotel manages to keep hungry children from gobbling it up.

SAN FRANCISCO (KGO) -- Every holiday season, the towering castle that slowly revolves under spotlights in the lobby of the Westin St. Francis gets a little bit bigger - and somehow, the hotel manages to keep hungry children from gobbling it up.

It's an edible edifice made with over 1,000 pounds of sugar and gingerbread. It was unveiled on the day before Thanksgiving amid pomp and circumstance to a bevy of children staring with eyes and mouths open wide.

Munching on the fresh-baked cookies handed out before the ceremony, one dad quipped that it was a good thing snacks were provided, "because otherwise we'd be eating that castle behind us."

The tradition began 13 years ago when executive pastry chef Jean-Francois Houdre's children challenged him to build a gingerbread house that looked like a chateau from his hometown in France.

Now, his kids are grown, but the challenge remains - and it's become a year-round affair.

The #HollyJollyWestinStFr holiday season has officially begun at @WestinStFr with the unveiling of these TWO palatial sugar castles! pic.twitter.com/EnBrWTkZRX

"Maybe two hours, one hour at a time, but every day," the castle gets a little work, Houdre said. "It's a non-stop project."

Now, there are two castles: a smaller one in the corner of the lobby is covered in white, sugary snow.

"It's really pretty, and it looks like a real winter wonderland," said 8-year-old Isabella Porcelli, visiting with her family from Tampa, Florida.

Though she admits she hasn't actually been to a winter wonderland, her older sister has seen castles in Romania, and confirms that the larger gingerbread structure is true to its medieval European roots.

Though Houdre insists it would be possible for one person to devour all the gingerbread that makes up the castle's towering walls, he points out the bread is extremely over-baked. It has to be dry to withstand the foggy, wet climate of San Francisco for its two months on display, he said.

As for the trees, turrets and tiny figurines - those are all pure sugar, of the type that's used to decorate wedding cakes. They're likely delicious - but the chef says he'd never take so much as a bite.