KGO
SAN FRANCISCO (KGO) -- A former senior investigator in the San Francisco District Attorney's office says he was fired in retaliation for whistleblowing. His claim-- that his boss George Gascon had been illegally carrying a gun while flying. His lawyer talked exclusively to ABC7news.

"While he was district attorney, he was flying while armed in violation of federal law."

Mckenzie is suing his boss DA George Gascon, saying he was the target of "retaliation and harassment" and was fired in October of last year because Gascon heard that he and other investigators were blowing the whistle on him.

Mckenzie was an executive of the District Attorney's Investigators union.

"The union had grave concerns about this allegation that the District Attorney had been flying while armed in violation against federal law."

Under federal law, only sworn peace officers can legally carry a firearm onto a plane. And only under strict circumstances.

"The district attorney is not a peace officer number one. Number two, there's no reason why he would need to carry a weapon on a flight," added Cajina.

Even as a former police chief of San Francisco, Gascon is not eligible to carry a gun while flying.

Peace officers who are eligible have to fill out TSA forms stating that they're on official business, have had firearms training and passed a special Armed While Flying program.

Cajina says, at least one investigator did go to the TSA with the allegation that Gascon had violated the law, not once but regularly.

"This was not a one-time event. It happened multiple multiple times and even after there had been warnings in the Department against doing so."

The lawsuit says that months after the TSA was notified, Mckenzie and most of the Investigators Association's governing board were punished or fired.

"I have confirmed that there is a federal investigation and it's our understanding that now the investigation is with the Assistant US Attorney."

Sources with knowledge of this case tell ABC7 News that a focus of the investigation was whether DA Gascon perjured himself on TSA forms he had to fill in order to carry a gun aboard flights.

Another source tells us Gascon legally carried a gun aboard flights but stopped when TSA rules changed.

Homeland Security, TSA and the DA's office declined to comment.

But the City Attorney issued a written statement saying "this case has no merit" and that Henry McKenzie was fired because he spread false information about the Da's office.

.
Report a correction or typo
Copyright © 2021 KGO-TV. All Rights Reserved.
RELATED
Former investigator files lawsuit against city, SFDA claiming he was fired as retaliation for whistleblowing 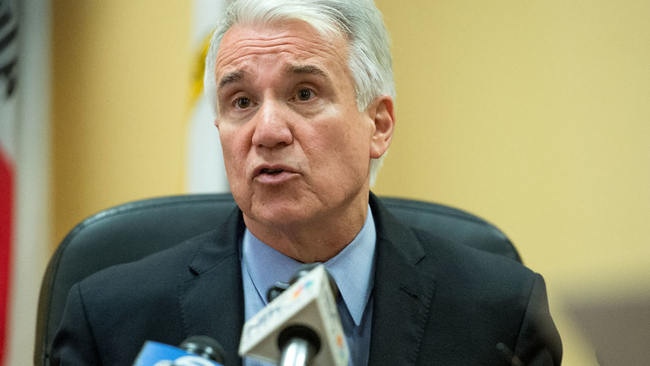