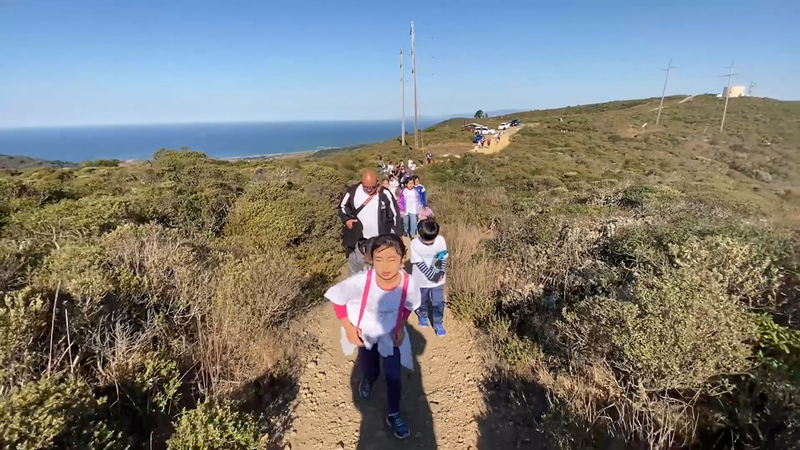 SAN BRUNO, Calif. (KGO) -- In 1769, Spanish explorer Gaspar de Portolá led an expedition from Mexico to what they thought was Monterey Bay.

Instead, on November 4, they accidentally discovered a land that would eventually become the Bay Area.

"250 years ago, the arriving Spanish had walked up from Mexico to what is now the State of California," Ohlone Portola Heritage Trail Committee member Tom Huntington said. "They came to the Sweeney Ridge top and looked out to see the San Francisco Bay. They were the first Europeans to come over the ridge and see the San Francisco Bay inside the Golden Gate."

In honor of the anniversary, Portola Elementary School in San Bruno decided to honor their namesake discovering the Bay with an annual hike to the top of Sweeney Ridge to see the exact view that Portolá saw all those years ago.

350 students and parents from Portola Elementary School in San Bruno are participating in the 35th Annual Mike Casey hike up to the top of Sweeny Ridge. This is where the Portola Expedition first discovered the San Francisco Bay. pic.twitter.com/7VsXAmUikB

"I noticed that our fourth grade history books had nothing on the namesake of our school, Gaspar de Portolá," Retired Portolá Elementary School teacher, Mike Casey, said. "So we decided to initiate a hike and do a little research on the man, the expedition and the impact on the Bay Area. Over the years, we decided to expand it to the entire school. So, from 60 in 1985 to almost 400 (people) every year."

So for more than 30 years, students from kindergarten on up hike the two mile trail down the street from their school to remember how their home came to be.

"Hopefully more people will come in and take in this vista," San Mateo Board of Supervisors President Carole Groom said. "Then they can remember from whence we come."

At the 200 year mark, Sweeney Ridge introduced a stone commemorating the Portolá expedition.

250 years ago this upcoming Monday (November 4th), this view was seen for the first time by the Portola Expediton. This hike commemorates that great moment in our Bay Area history. pic.twitter.com/ZdKz5KQELJ

At the 250 year mark, there was a plan to honor the natives of the land who were there long before Portolá discovered the San Francisco Bay.

"Because of this significant anniversary, the Golden Gate National Recreation Area has chosen to put in some new displays so people can better understand all the history that came at this place all those years ago," San Mateo County Historical Association President Mitch Postel said.

The history pertains to the thousands of Native American tribes that lived in what is now called the Bay Area for years.

The tribes, including the Chiguan an Aramai, and the Ramaytush Ohlone peoples greeted Portolá and his crew in 1769.

But hospitality soon turned to eradication of the people from their homeland.

"I am a Trowtraahl Salinan Rumsiem and Ramaytush Ohlone," Gregg Castro said. "The building of their civilization kind of meant the end of ours. But, the good part is that we're still here. So, some significant awareness of that is important because this is our homeland. We still feel the sacred obligation to be the caretakers of this place. We don't own it, we are part of it. We now have other people that are willing to be caretakers with it and that's the reality of it. We want to work together to fulfill that sacred obligation."

Castro hopes the new markers could help share the story of his people as their history is just as important as the discovery expedition of Portolá.

As a sign of appreciation for Castro being at the anniversary celebration, Tom Huntington wanted to share a moment with his new friend by presenting a small gift like travelers would do to the native people in the 1700's.

The next step in honoring the expedition of Gaspar de Portolá is through a proposed heritage trail spanning 90 miles along the original path that Portolá traveled 250 years ago.

Huntington hopes the project will be completed in the coming years.

Tom Huntington, Ohlone Portola Heritage Trail Committee, and Gregg Castro, Principal Cultural Consultant of the Association of Ramaytush people, share a moment at the top of Sweeney Ridge. Tom presents Gregg with a gift to commemorate working together for care of the Ohlone lands pic.twitter.com/o1Am4wFArQ