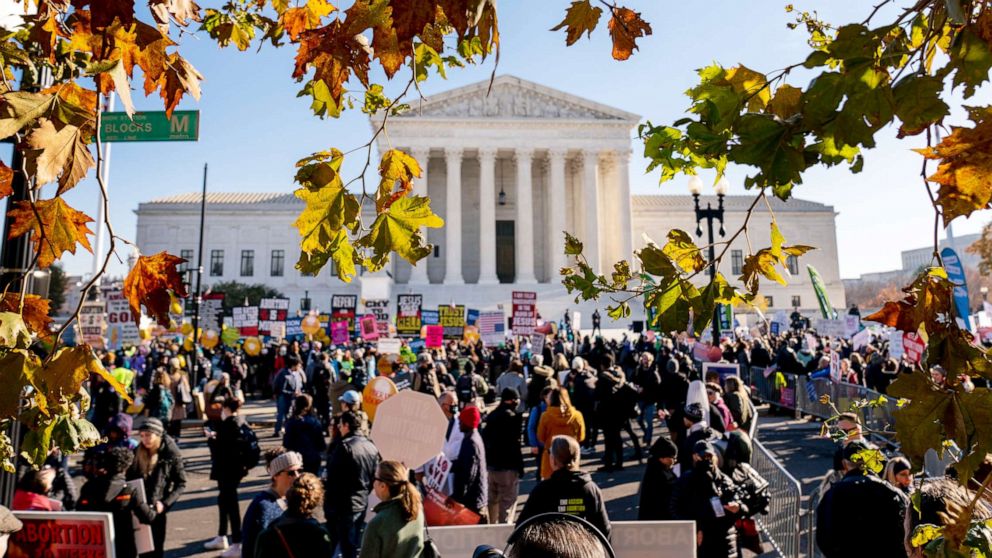 With loud voices on both sides of the abortion debate booming over dueling speakers outside the Supreme Court on Wednesday, many of those protesting were young women -- both for and against abortion rights.

ABC News spoke to two of them about why they wanted to be close to where the justices were hearing the historic case that could decide the fate of Roe v. Wade and abortion access.

Here are their stories:

Maya Ward, 25, was one of the thousands of demonstrators who traveled hours to be in Washington.

A communications and development associate at the Women's Rights and Empowerment Network (WREN), a women's rights nonprofit based in Columbia, South Carolina, she flew in the night before.

She said she was raised in a conservative home in Greenville, South Carolina, where messages against abortion were often the dominant voices in the room.

"As I was growing, and I was meeting different people, I was hearing opposite things," Ward said.

She wanted to move from passively paying attention to issues she cared about to advocating first-hand, she said.

"Actually working to use my voice to testify against legislation and to get involved contacting my legislators," Ward said.

Twenty minutes before she was set to speak in front of the crowd Wednesday -- an opportunity she found out about just two weeks ago -- she said she was feeling good.

While she has advocated for a variety of issues and demonstrated outside of South Carolina's statehouse, Ward said protesting outside the U.S. Supreme Court was "the wildest thing ever."

Wearing a black denim dress that was hand-painted to say "pro-life," the 22-year-old anti-abortion activist from Las Vegas, Nevada, has made the cross-country trek to take part in the annual March for Life.

She flew in Tuesday night, viewing this as part of the same mission.

"This is the most important issue of our time. It's the greatest human rights injustice of the era," Clark said. "This is going to be a huge opportunity to reverse Roe v. Wade and to be able to have this decision go back to the states."

Clark, who recently graduated from the University of Las Vegas and runs an anti-abortion apparel line with hand-painted clothes and accessories, became active in the movement in high school, saying she sued her school in an effort to start an anti-abortion club.

Outside the court, she said the energy was different Wednesday -- that in her eyes, the usual scuffles between sides were less apparent.