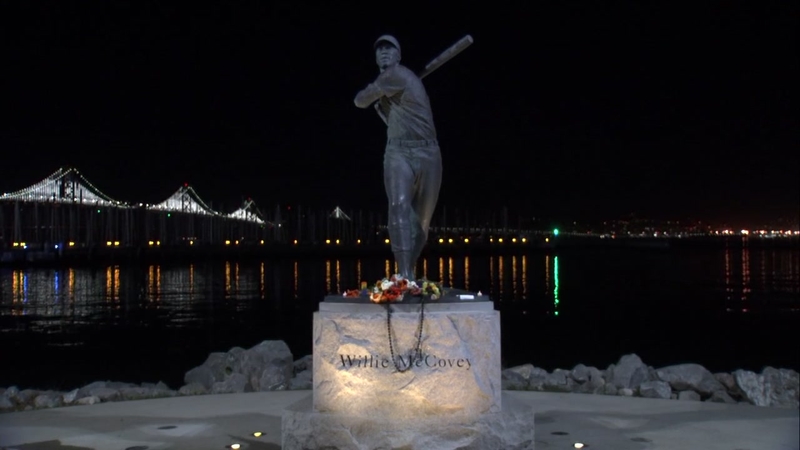 SAN FRANCISCO (KGO) -- Fans have lined Willie McCovey's statue with flowers and candles in memory of the Hall of Fame first baseman who died Wednesday.

They gathered here at the Willie McCovey statue last night for a vigil. It was quiet and respectful as fans remembered number 44 and all he gave to the team. The Giants CEO said the community lost a gentleman and a legend.

"He really is Giants royalty. You see the statue out behind the cove, you hear about the Willie Mac Award. You think of him as a gentle giant. He was just big and imposing and he was feared as a hitter and soft and cuddly and warm as a person," said San Francisco Giants CEO Larry Baer.

McCovey burst in the majors in 1959 with the Giants, winning the rookie of the year award. He played 22 seasons in the majors, covering four decades, retiring in 1980, with 521 home runs. He was one of the most feared hitters in the game.

McCovey was inducted into the Hall of Fame in 1986.

McCovey's number was put up in lights last night at AT&T Park -- which they called McCovey's second home. San Francisco City Hall also paid tribute to the Hall of Fame first baseman, lighting up the building in Civic Center Plaza in orange.

His statue sits next to the cove named after him, McCovey Cove. There is no chance he will ever be forgotten -- he will always be a permanent part of the Giants.

The Giants have created a way for fans to share their condolences. You can send letters to the email address: Forever44@sfgiants.com.