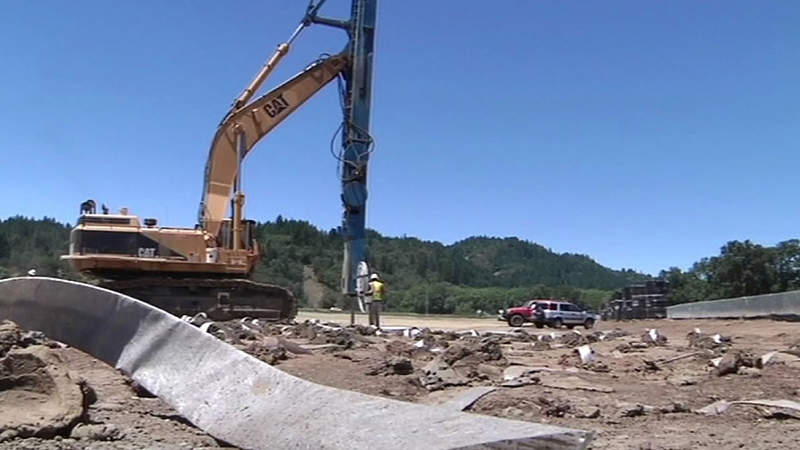 Caltrans had estimated the bypass would cost $210 million. But next week the agency will ask the California Transportation Commission for $64.7 million in additional funding for what it calls "unforeseen issues."

ABC7 News has learned that request includes only a small portion of the tens of millions of dollars needed for environmental mitigation, so the price is likely to go even higher.

Caltrans is building a freeway bypass on Highway 101 around the town of Willits in Mendocino County.

ABC7 News started investigating the Willits bypass soon after work began last year. The project is now about half finished and it has not gone smoothly.

In most projects, Caltrans gives a detailed breakdown of how they will spend extra money they are requesting, but not in this case. Caltrans is refusing to tell us exactly how your tax money is going to be spent. Instead they presented a risk analysis that shows a "50 percent probability, the additional cost needed to finish the project will be $64.7 million."

A look back at the many problems during bypass construction gives you some idea of how costs have escalated.

From the start, there have been angry protests and lawsuits from environmental groups. Massive erosion at the site sent pollution streaming into a protected creek and Caltrans was charged with violating the U.S. Clean Water Act. Construction crews accidentally damaged or destroyed a known Native American archaeological site that was supposed to be protected by law.

Local tribes say Caltrans has now discovered about 30 more potentially important Indian sites in the bypass area. They accuse Caltrans of not doing enough to find and protect their sacred history.

Native Americans march in San Francisco in protest against the Caltrans freeway bypass in Willits.

The bypass is designed to route Highway 101 traffic around a bottleneck where traffic backs up in the city of Willits. The Mendocino Council of Governments supports it.

"This is for the benefit of goods movement and the traveling public and for those people in the Bay Area who come up here on their weekends and on their vacations," said Phil Dow, executive director of the council.

The project is huge, six miles long, running through habitat for threatened coho salmon and steelhead trout. It also includes filling in more than 40 acres of federally-protected wetlands.

The impact is so severe, Caltrans is required to do the largest environmental mitigation in its history to compensate. But Caltrans has had trouble meeting permit requirements.

Ellen Drell from the Willits Environmental Center accused Caltrans of bullying saying, "They delay, they drag their feet. They basically don't do what the agencies are asking them to do," he said.

Open space in Willits where Caltrans is building a freeway bypass around the town.

Caltrans now refuses to talk to ABC7 News on camera about the Willits project, but last October Caltrans spokesman Phil Frisbie disputed that charge. "We are going to follow any requirements by our permitting agencies," he said.

That's what Caltrans said, but in June the department was so far behind in its environmental requirements, the U.S. Army Corps of Engineers suspended the permit and shut down most work on the bypass. It took almost three weeks to broker a deal to get the work going again.

The Corps required Caltrans to consider redesigning the Northern Interchange of the bypass to reduce the impact on wetlands. Caltrans submitted a new design and the Corps is evaluating it. The proposed plan is not being released to the public.

The bypass was planned for years as a four lane freeway, but at this point, only two lanes are being built. Even so, Caltrans now appears likely to spend as much money as was originally planned for four lanes.

Caltrans documents estimate the bypass will save drivers 10 minutes during peak traffic times.