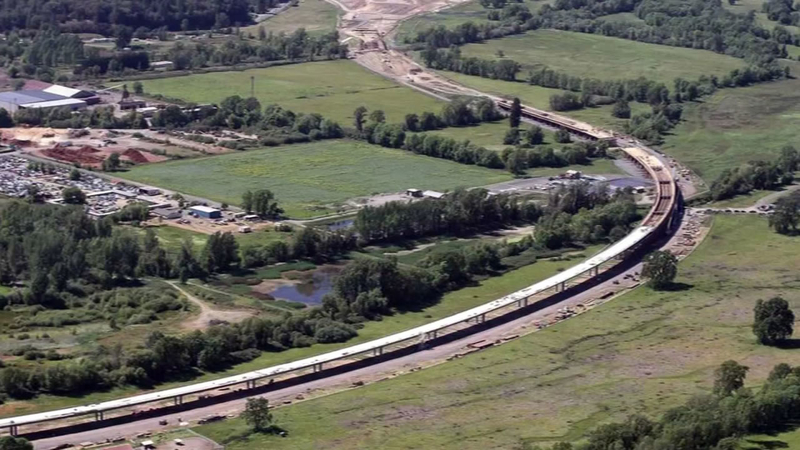 WILLITS, Calif. (KGO) -- Local government officials are demanding Caltrans stop plans to use poison on land it is supposed to be protecting.

This is the latest battle over a troubled $300 million project ABC7 News has been investigating for two years. Caltrans is building a bypass on Highway 101 around the town of Willits in Mendocino County.

The six mile freeway bypass is now 70 percent finished and expected to open next year. But Caltrans has struggled to meet its environmental requirements and now faces new controversy over plans to use herbicides to speed up the removal of non-native blackberries.

"In supposedly mitigating and improving the wetland habitat, what they are proposing is actually to poison it," said Willits city councilwoman Madge Strong.

The Willits bypass runs right through protected wetlands and streams.Damage from construction is so extreme Caltrans is required to do the largest environmental mitigation in its history to compensate. That includes restoring sensitive habitat and creating new wetlands, a massive plan that may cost taxpayers as much as $100 million with very little public input.

The project's permits are public and they say "herbicides and pesticides shall not be used on the bypass or mitigation parcels" unless certain conditions are met.

Caltrans does not have that permit yet, but the agency put out a call for bids on work that includes an herbicide use plan to poison 67-acres of invasive blackberries, along with three pages of approved chemicals.

The project documents also require that if Caltrans even considers herbicides it must consult with the Mendocino County Board of Supervisors, but Caltrans did not do that.

In fact, a few weeks ago, the board of supervisors voted unanimously to oppose using herbicide on the project. The Willits City Council also voted four to one against herbicides. Local Indian tribes oppose it too.

At a recent water board hearing, concerned citizens demanded Caltrans keep the chemicals out of the environmentally sensitive valley around Willits.

"It has never been subjected to broad scale use of herbicides - they are unknown in Little Lake Valley," said Ellen Drell of the Willits Environmental Center.

Caltrans did not appear at the hearing because the herbicide issue was not actually on the agenda, but a spokesperson sent an email saying in part,"We must use herbicides to meet our mitigation goals and timeline. Any herbicide application will follow all best practices and laws."

Caltrans says it will apply for the proper permit, but the Water Board could block it.

"We do have concerns, but we have yet to see exactly what Caltrans' proposal is to note the full extent of it," St. John said.

Caltrans says it's planning a public meeting about the herbicide issue and there will be 30 days for public comment, but no date has been announced.