Woman, 72, gored multiple times by bison after getting too close taking pictures 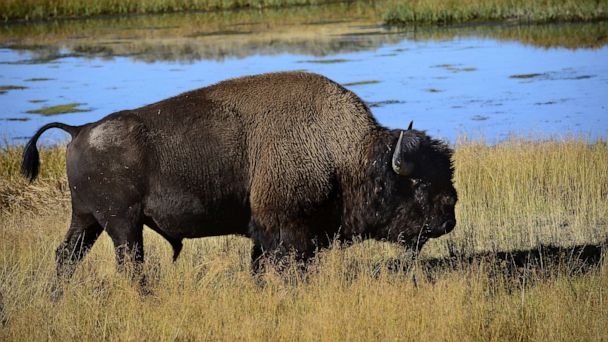 A 72-year-old woman was gored multiple times by a bison in Yellowstone National Park after trying to get a close up picture of the animal.

The incident occurred on the evening of June 25 at the female's campsite at Bridge Bay Campground in Yellowstone National Park when the woman from California, who currently remains unidentified, approached within 10 feet of the bison multiple times while attempting to take a picture of it, according to a statement issued by Yellowstone National Park.

"The series of events that led to the goring suggest the bison was threatened by being repeatedly approached to within 10 feet," said Yellowstone's Senior Bison Biologist Chris Geremia in the statement. "Bison are wild animals that respond to threats by displaying aggressive behaviors like pawing the ground, snorting, bobbing their head, bellowing, and raising their tail. If that doesn't make the threat (in this instance it was a person) move away, a threatened bison may charge. To be safe around bison, stay at least 25 yards away, move away if they approach, and run away or find cover if they charge."

Park Rangers were called to the scene and immediately administered first aid on the goring victim who suffered multiple wounds in the attack.

The 72-year-old woman was then taken to the Eastern Idaho Regional medical Center by helicopter where she received further treatment. Her current condition was not disclosed and the incident remains under investigation at this time.

"Wildlife in Yellowstone National Park are wild," authorities from Yellowstone declared in their statement. "When an animal is near a campsite, trail, boardwalk, parking lot, or in a developed area, give it space. Stay more than 25 yards (23 m) away from all large animals - bison, elk, bighorn sheep, deer, moose, and coyotes and at least 100 yards (91 m) away from bears and wolves. If need be, turn around and go the other way to avoid interacting with a wild animal in close proximity.

According to Yellowstone National Park, just last week a 37-year-old woman from Columbia, Missouri, sustained a minor injury from a female grizzly bear while hiking on the Fairy Falls Trail near Old Faithful when she encountered two grizzly bears at very close range.

The female bear reportedly knocked the woman down and scratched the victim on her thigh and face after falling to the ground before she was able to use bear spray to fend the animal off.

The Humane Society of the United States released the following statement Tuesday morning in response to the woman being gored at Yellowstone by a bison:

"The Humane Society of the United States is sad to learn of the goring of a Yellowstone visitor by a bison and we hope that she will be okay," said John Griffin, Senior Director of Wildlife Protection for the Humane Society of the United States. "With millions of Americans taking to the outdoors this summer -- and particularly this holiday weekend -- this incident is an important reminder to exercise the greatest caution when exploring landscapes that wildlife call home. To keep people and wild animals safe when wildlife watching, it is paramount to understand their needs, respect their space, keep a safe distance and avoid any actions that might frighten, aggravate or incite them. These incidents should never have to happen."
Report a correction or typo
Related topics:
abc newsnational
Copyright © 2020 ABC News Internet Ventures.
More Videos
From CNN Newsource affiliates
TOP STORIES
Concern over SF and Oakland's plans to start distance learning this fall