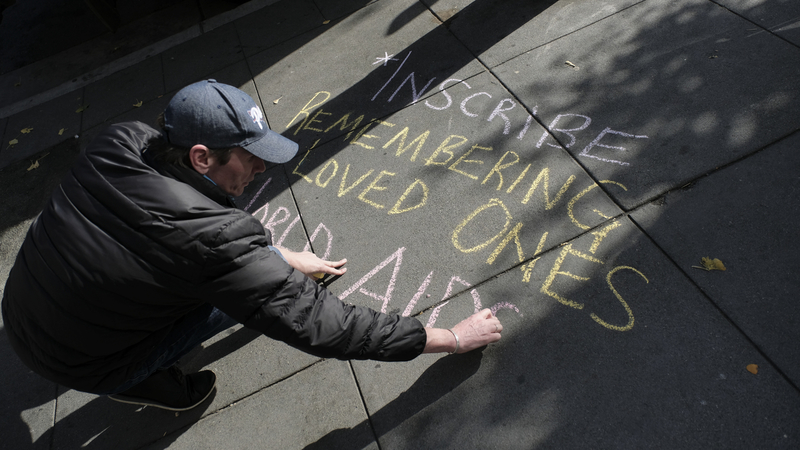 SAN FRANCISCO (KGO) -- Ground Zero, 36 years later -- also known as Castro Street in San Francisco, where on this 29th World AIDS day survivors like Gregg Cassin chalked their hearts onto the sidewalk, remembering generations of struggle, and so many lost friends.

"I am one of those people who stopped counting long ago," said Gregg, who has survived AIDS since 1983. He observed today with friends on Castro while, while in Golden Gate Park, at the 25th anniversary of the AIDS Memorial Grove, a distinguished gathering cheered former president Bill Clinton who, while governor of Arkansas, recognized the profound universality of this continuing world health crisis.

"This burden will give people peace, reflection and memory," said Mr. Clinton in his keynote address. "But only those of us who remain can do the bending." "He was on the radar of it early on," said Ruth Cokerburks, who has known the former President for most of her life.

She came to San Francisco, today, as an honoree for helping Arkansas AIDS patients in the epidemic's darkest, frightening, early days. "At the time I was the most hated woman in Arkansas," Cokerburks told us, because people equated the disease with homosexuality. "I always felt like I held my men in my arms, took them across the river, and there they are waiting for friends and family who love them, and did not judge them.'

We asked Cokerburks about the difference between AIDS then and now. "People are more accepting of it, now. You don't die of it. You live with it. That makes a huge difference."

Meantime, back on Castro, school kids scrawled names of people they never knew but now know about, while those who have seen seen too much looked on, and taught the future generation. "It is a horrible thing," Greg Cassin told us after writing the name of a friend who died two weeks ago. "I am lucky I survived." In 2017, he is living proof of how the words, HIV positive have turned from a death sentence to an attitude.