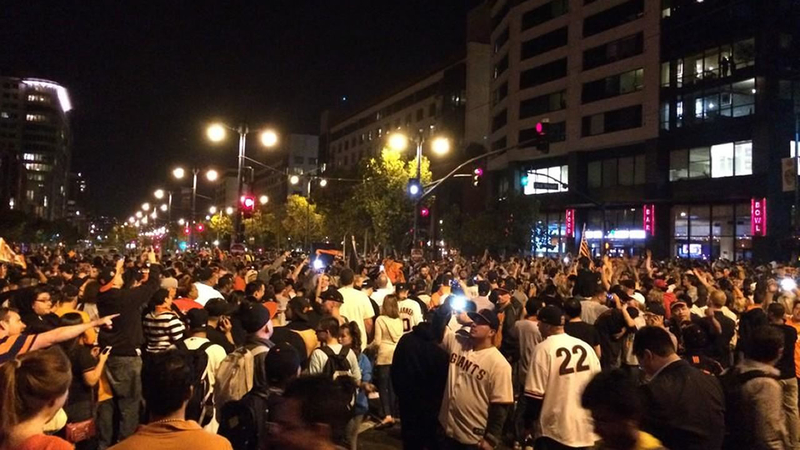 The victim, who is expected to survive his injuries, said he was shot in the Mission District.

A previous shooting was reported at 21st and Valencia earlier in the evening as well. That victim was injured in the arm and is also expected to survive.

Police also reported one person was stabbed, but there was no word on that person's condition.

City streets in areas including Market Street and the Mission District were taken over by large crowds celebrating the San Francisco Giants' World Series victory against the Kansas City Royals. 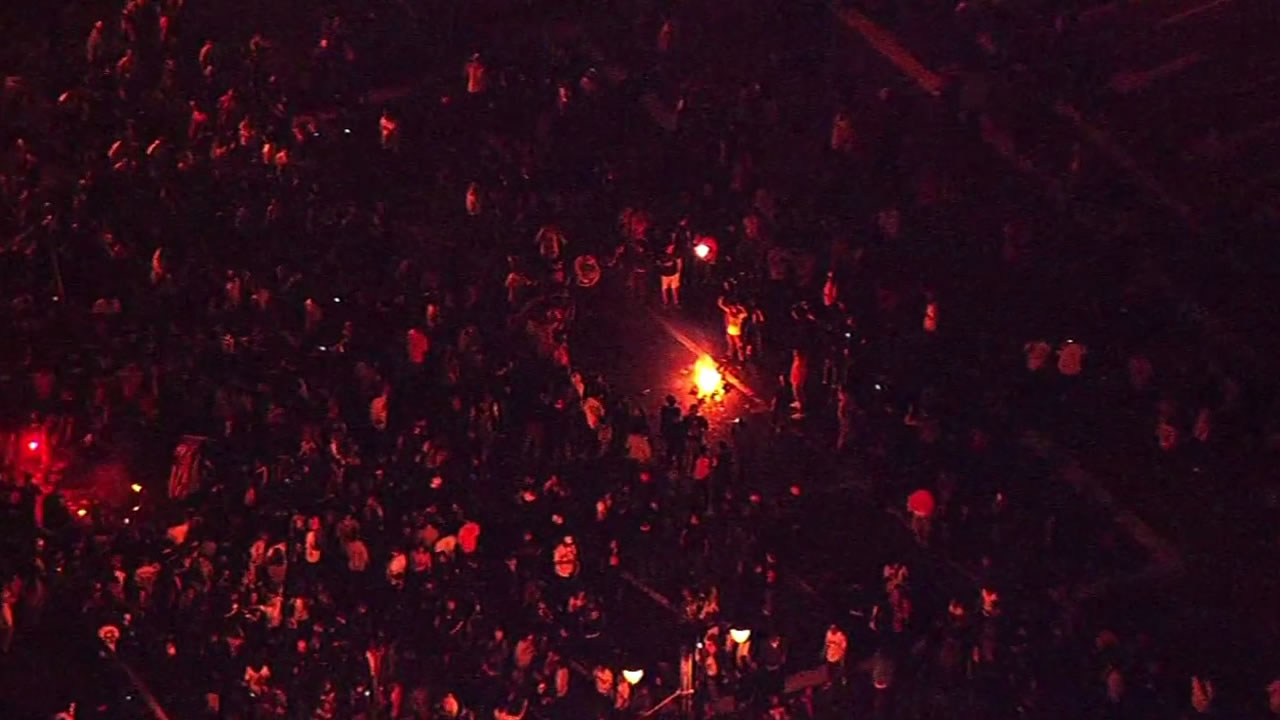 The widespread rowdy celebrations also caused most bus service to be suspended in San Francisco throughout the city and blocked traffic on streets including Market and Mission streets, according to the San Francisco Municipal Transportation Authority.

Muni metro service is continuing both in the subway and on the surface, as are all shuttle buses supporting metro service, Muni officials said. Owl service will also run as scheduled.

Some of those in the crowds on Mission Street were attending with their families.

"I gotta get up early for work tomorrow but it doesn't matter....we don't know when its going to happen again," said Kenny Johansen, 51, Pacifica, who brought his family to check out the post-game festivities in the Mission.

"I skipped my homework for this." said Kasidy Johansen, 14, his daughter.


Police reported a number of bonfires and firecrackers including a large fire at 22nd and Mission and large crowds have been seen climbing on top of buses in some areas.

VIDEO: Crowds get rowdy as celebrations continue in Mission District 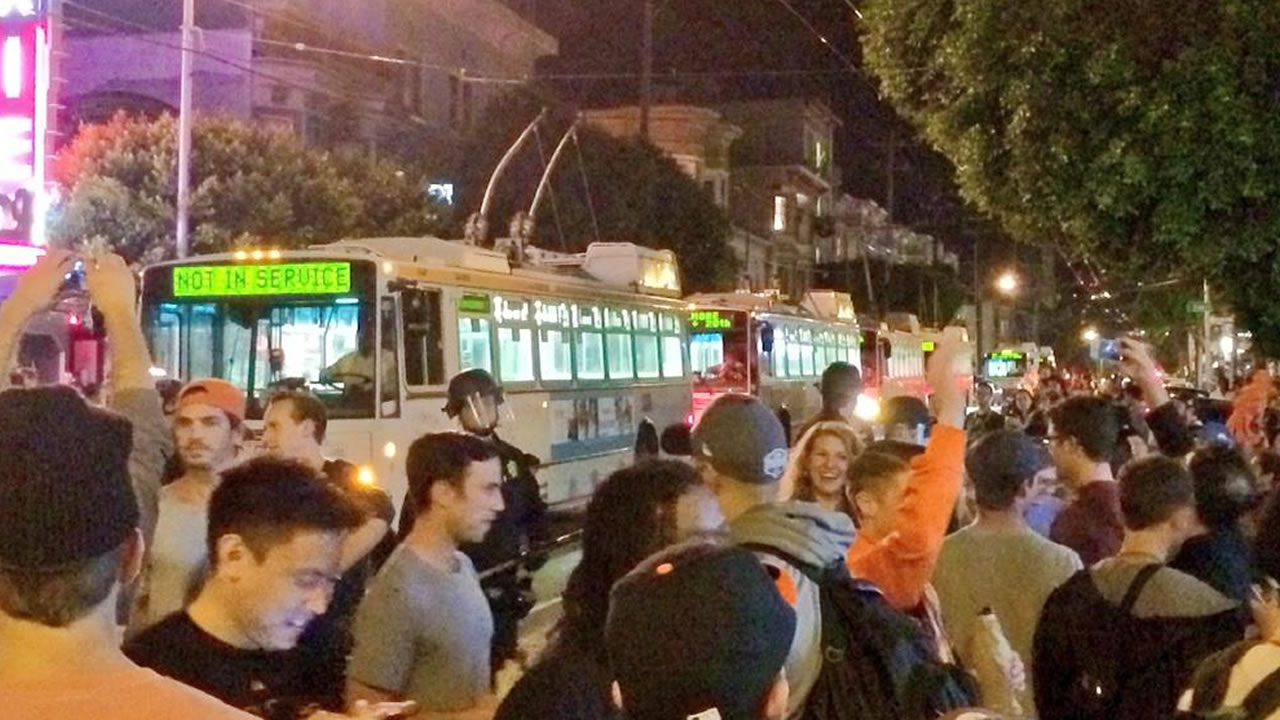 San Francisco residents Sarah Williamson, 29, and 24-year-old Chloe Carpenter took in the view near the 24th/Mission BART station a short time before 10 p.m., which included people dancing on top of cars, a number of people climbing on street signs and others setting off fireworks.

Both said this year's festivities seemed slightly tamer than the celebrations that occurred in the Mission District after the Giants' last two World Series wins.

"It's clean fun," said Williamson. "It's like the anti-apocalypse where people are nice to each other and high-fiving."

There have been reports of less friendly crowds, however, with bottles being thrown at officers in some instances. Multiple San Francisco police officers were injured while attempting to disperse crowds and extinguish bonfires during celebrations of the San Francisco Giants' World Series victory Wednesday evening.

Officers were assaulted with bottles on Market Street in the Mission District, while others in the Southern district were stuck with bottles, firecrackers, and M80s, according to police spokesman Gordon Shyy.

The objects were thrown at officers as they attempted to disperse crowds gathered in the streets while also assisting firefighters as they extinguished bonfires, Shyy said.

No suspect information is currently available, according to police.

Some arrests were made but police have not released numbers. 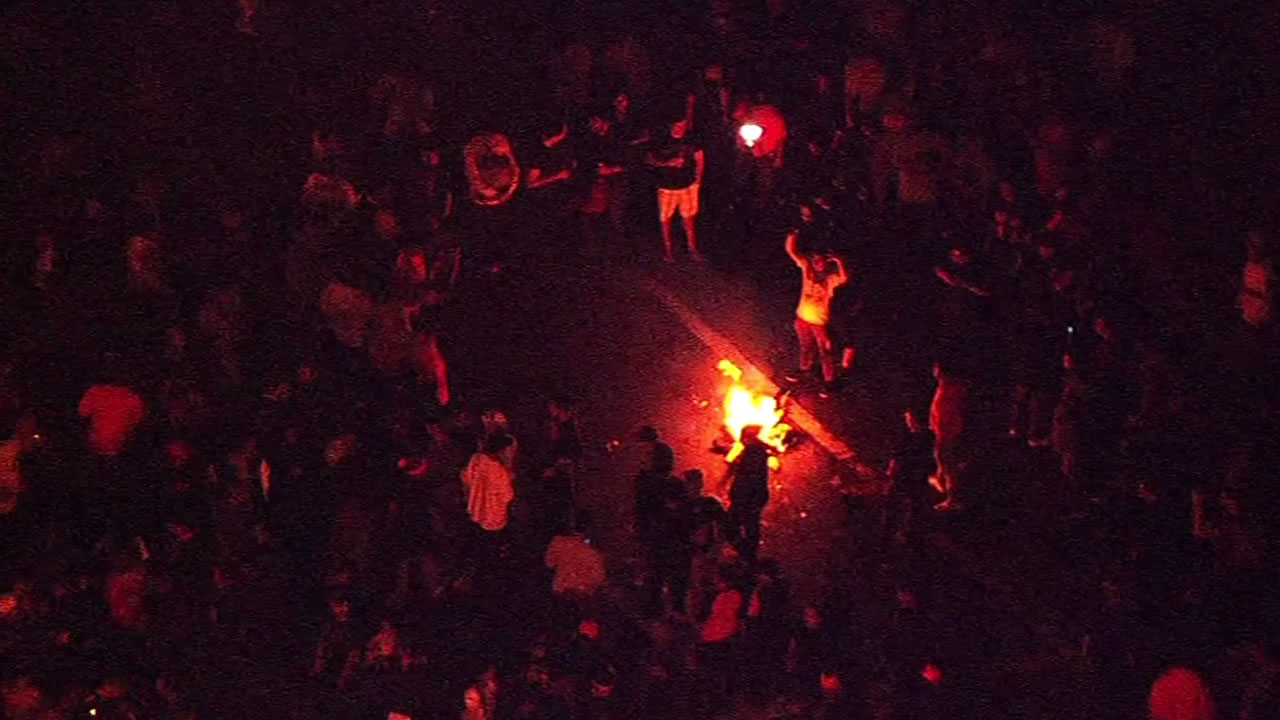 PHOTOS: Celebrations in SF turn rowdy after Giants World Series win
Giants fans gathered in the streets of San Francisco uncorked the champagne, lit bonfires, danced in a mosh pit and hugged strangers on Wednesday as their team scored its third World Series win in as many championship appearances.

Both teams scored twice in the second inning and Michael Morse hit a broken-bat RBI single in the fourth to score Pablo Sandoval with what proved to be the winning run. Sandoval reached base all four times in the game.

San Francisco Mayor Ed Lee announced Wednesday evening that the city will hold a victory parade for the Giants on Friday.

Lee congratulated the Giants for their third World Series win in five years.

"...This world-class organization brought our city together as only our hometown heroes can," Lee said in a statement.

"San Francisco waits with giant anticipation for the return of our hometown team so we can celebrate as one city with a parade down Market Street to welcome them home," he said.

The parade is scheduled to start at noon at Market and Steuart Streets and continue down Market Street to Civic Center Plaza.