KABC
By Marc Cota-Robles and Leticia Juarez
MENIFEE, Calif. -- The YouTube shooting suspect's family said they told police about her anger toward the tech company and warned them she might be headed toward San Bruno.

Nasim Aghdam allegedly opened fire at YouTube's main campus on Tuesday, wounding three people before turning the gun on herself, according to police.

Aghdam's brother, who did not want to be identified, said that he Googled Mountain View, found that it was close to the YouTube headquarters and said he called the department.

"So I called the cop again and told him she went all the way from San Diego, so she might do something," he said.

He said he didn't know his sister had a gun on her but did feel that she was going to the headquarters to possibly "start a fight."

When asked by reporters regarding prior warnings reported to police before the attack, San Bruno Police Chief Ed Barberini said at a Wednesday morning press conference that he did not know what information about the suspect was received or relayed to law enforcement before the shooting.

He added that Aghdam was angry about the company's policies and had gone to a gun range in the area before driving to the YouTube headquarters near San Francisco and carrying out the shooting.

Barberini also said the 39-year-old got into the building through a parking garage, and that investigators are in the process of executing search warrants at two properties.

The police chief also said a Smith & Wesson 9 mm semi-automatic handgun was found at the scene of the shooting, and the weapon was registered to Aghdam.

The brother described his sister as a "nice" and "innocent" person, "not today, but she never hurt any creature," he said.

TIMELINE: Events that led up to the YouTube HQ shooting in San Bruno (1 of 11)

Here's a timeline of Nasim Aghdam's moves in the days before the shooting, as reported by police and family.

Aghdam "hated" YouTube and was angry that the company stopped paying her for videos she posted on the platform, her father, Ismail Aghdam, told the Bay Area News Group. On Monday, he called police to report his daughter missing after she didn't answer the phone for two days and warned officers that she might go to YouTube, he said.

Officers in Mountain View - about 30 miles from YouTube's headquarters - found her sleeping in her car in a parking lot around 2 a.m. Tuesday but let her go after she refused to answer their questions. Aghdam didn't appear to be a threat to herself or others, police spokeswoman Katie Nelson said. Mountain View police confirmed that the family reached out to them about the YouTube videos but said they never mentioned anything about a possible threat.
The suspect's brother said police in the Bay Area told the family they would keep an eye on Aghdam after they found her sleeping in her car, and 12 hours later, the shooting happened.

"Our family is in the absolute shock and can't make sense of what has happened yesterday," the suspect's father said in a Wednesday statement that thanked authorities and asked the media for privacy. "Although no words can describe our deep pain for this tragedy, our family would like to express their utmost regret, sorrow for what happened to innocent victims."

Several friends and extended family were spotted visiting the Riverside County home. One woman outside the house also said the police were supposed to be watching Aghdam.

"They said she was angry at YouTube, so be careful, and police said, 'We are going to watch her,' but they didn't watch her," the woman added.

Neighbor John Rundell said he spoke to Aghdam's father after the shooting.

"He tried to tell me his side of the story. It's the same thing. He's heartbroken, he's a dad, he's a great guy. I think he was a good father, and it just happens when you have kids sometimes," Rundell said.

Family and friends said Wednesday would have been Aghdam's birthday.

San Bruno police said they were still investigating a motive and that there is no evidence that Aghdam knew the victims she shot or that anyone was specifically targeted. Earlier reports indicated that the shooting may have resulted from a domestic situation, but authorities later pulled back from those statements.

One of the victims - a 36-year-old man - remains in serious condition, a spokesman for Zuckerberg San Francisco General Hospital said. His condition was upgraded from critical when he was brought in Tuesday.

RELATED: YouTube employees back at work after shooting at headquarters

Aghdam had several videos on YouTube, preaching in favor of vegans and rallying against animal cruelty. Her relationship with the tech giant made an ugly turn when YouTube changed its filters, causing some users to lose followers.

She wrote on her website, "Be aware! Dictatorship exists in all countries but with different tactics! They only care for personal and short-term profits and do anything to reach their goals even by fooling simple-minded people, hiding the truth, manipulating science and everything, putting public mental and physical health at risk, abusing non-human animals, polluting the environment, destroying family values, promoting materialism and sexual degeneration in the name of freedom and turning people into programmed robots!"

The rest of her message targets YouTube and censorship.

"There is no free speech in the real world and you will be supressed for telling the truth that is not supported by the system. Videos of targeted users are filtered and merely relegated so that people can hardly see their videos," it said.

On Feb. 20, YouTube enacted a new advertising policy that demonetized channels with less than 1,000 subscribers and 4,000 hours of watch time.

"Yesterday's horrific act of violence was deeply shocking and disturbing to our YouTube Family," the video-sharing website said in a statement Wednesday. "Still, we are uplifted by the heroic acts we witnessed both from employees and the San Bruno community, especially the first responders."

The statement said security at YouTube offices worldwide will be increased, and employees "have been encouraged to take time off of work, or work from home and we are making sure wellness services are readily available." 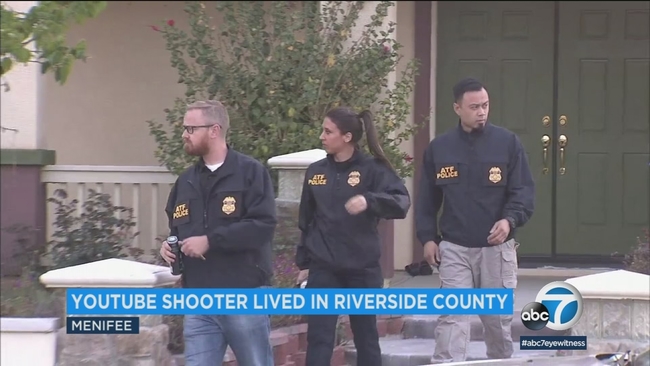 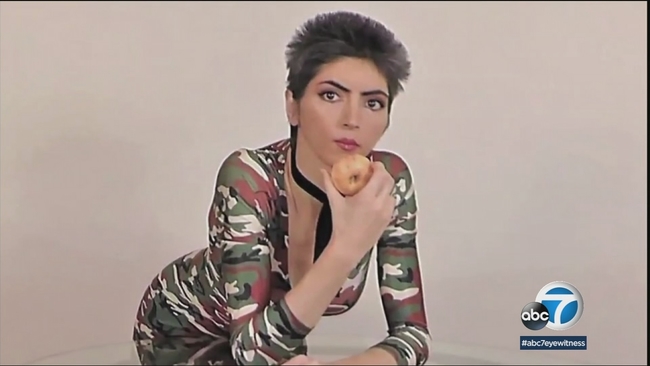 YouTube shooter ID'd as user who lived in Riverside County 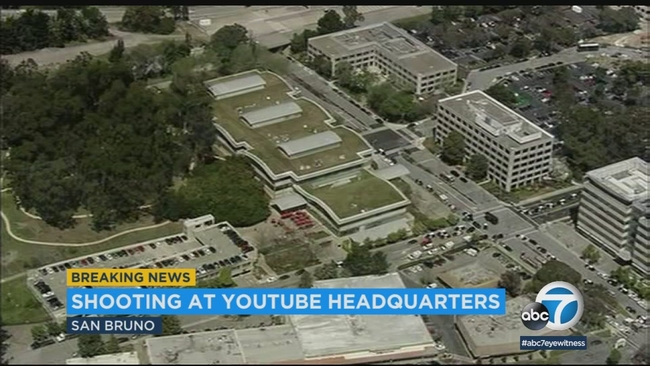 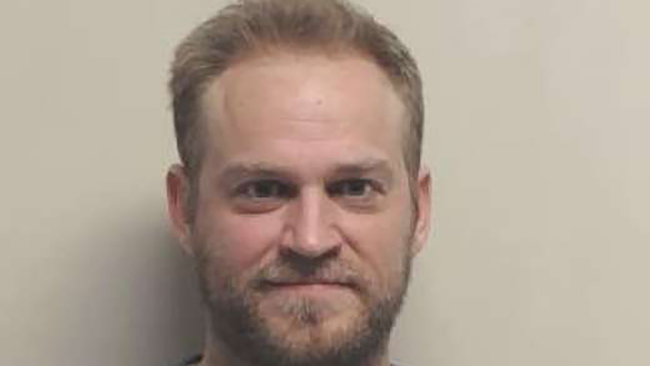 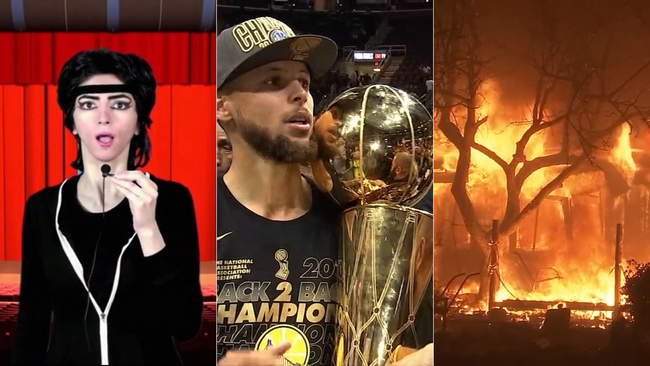 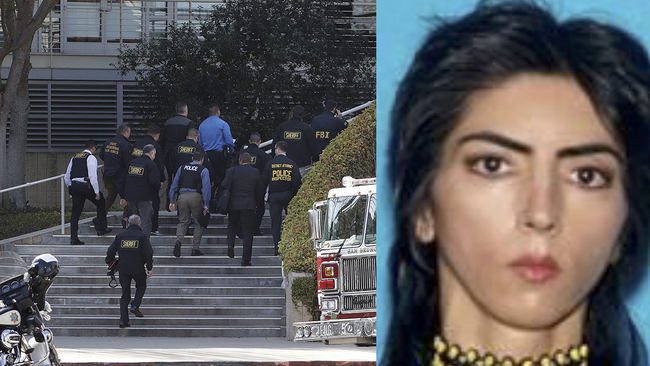 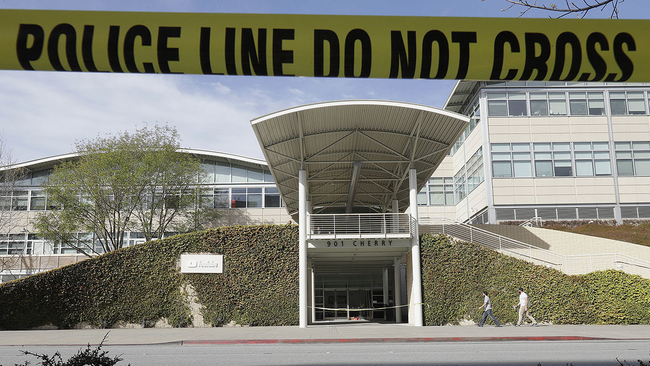 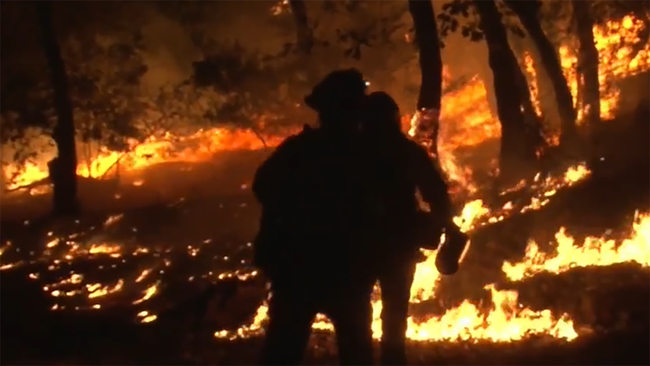