A car sunroof shatters, but the repair leaks 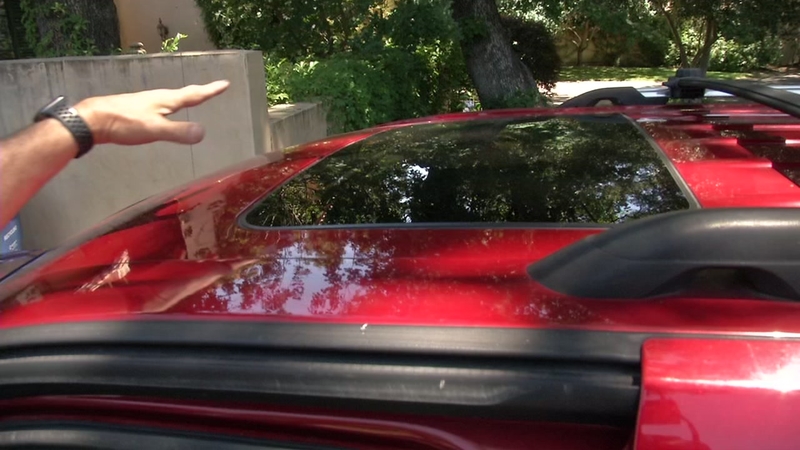 A car sunroof shatters, but the repair leaks

ALAMO, Calif. (KGO) -- Imagine glass shattering above your head. As frightening as that sounds, that's what happened to one Bay Area couple. When their car's sunroof shattered, they found themselves more mystified than frightened. Putting the pieces back together proved even more difficult.

It's a drive many Bay Area residents have taken -- heading westbound from Lake Tahoe back to the Bay Area.

Steve Armstrong of Alamo recalls hearing a big popping sound when he made the drive not long ago.

"At first I thought I had a blow out on my tire. So I actually pulled over. Checked all four wheels and there was nothing there," he said.

His sunroof was closed at the time -- so he had no idea it had just exploded.

It was only when he heard the sound of the wind coming from near the car's roof, that he opened the cover and discovered it.

"I just couldn't believe this would happen. I was totally shocked because I've never heard of any body's sunroof doing that," said Armstrong.

The sunroof had fractured, but remained in one piece.

Safelite agreed to replace it the glass and all seemed fine. Until the rain started.

Armstrong walked out to his car one day and found what he described as several pots of water spilled inside his Jeep.

"The seat was soaked," said Steve. "The side was soaked. Water was actually still dripping even though it wasn't raining."

Repairing the damage from the flood turned into an ordeal. Armstrong said Safelite blamed him for not cleaning out the glass from the drainage tracks before the repair. They declined to make the repairs.

"Right away I knew I was going to get nowhere with the company," said Armstrong. He contacted 7 On Your Side and we contacted Safelite. They fixed the leak, and had the upholstery cleaned.

Safelite told us, "This was an unusual situation that took place in December, involving complications outside our control. Our local associates went above and beyond our service offerings. We're glad we were able to work with the customer to resolve the situation."

"I just like to thank you guys for helping me solve the problem," Armstrong said.