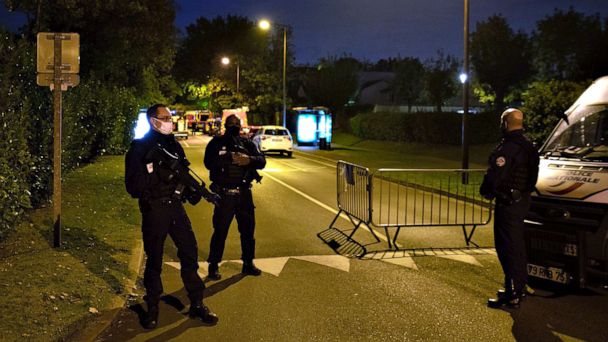 Eleven people are in custody after police in a Paris suburb shot to death a man seen carrying a knife that authorities believe may have been used to kill another man found nearby.

The shooting of the suspect, 18, occurred around 4 p.m. local time on Friday in the town of Eragny in the Val d'Oise. France's Anti-Terror Prosecutor's Office confirmed to ABC News that it has opened an investigation into whether the killing is linked to terrorism.


The victim was beheaded, authorities said. He was a male teacher at a local middle school who had received threats after mentioning the controversial Charlie Hebdo cartoons depicting the Prophet Mohammed during a lesson, according to police. The lesson prompted a complaint from one of the parents.

Speaking Friday night from the middle school, French President Emmanuel Macron said the teacher was the victim of a "blatant Islamist terrorist attack."

"One of our fellow citizens ... was murdered today for teaching, for teaching students freedom of speech, freedom to believe and not to believe," he said. "It is no coincidence that this evening it is a teacher that this terrorist killed because he wanted to bring down the Republic in its values."

The victim was identified by authorities as Samuel Paty, 47, a professor of history and geography at the middle school, College du Bois d'Aulne.

The suspect had asked students in front of the school to help him identify the victim, according to authorities. Paty was attacked in the immediate vicinity of the school while on his way home and also had multiple wounds on his head, in the abdomen and upper limbs, authorities said. A bloodied knife was discovered a few meters from the scene of the crime, police said.

The suspect was identified by authorities as a Moscow-born Chechen refugee who had a French residence permit. He was unknown to intelligence services, authorities said.


The teen claimed responsibility for the attack on Twitter in a post that referred to the victim by name and included a macabre photo of him, Ricard said. "I executed one of your hellhounds who dared to belittle Muhammad," part of the post said, according to authorities. The account has since been suspended.

Eleven people are in police custody, including four members of the suspect's family, authorities said. The student's father who complained about the teacher's lesson and a second man who came with him to the middle school are in custody. The second man's partner was also taken in for questioning. Two people who came forward and indicated that they had been in contact with the perpetrator shortly before the events are also in custody. Police are investigating to establish the involvement of those in custody, authorities said.

Macron promised a swift response from the government on Friday.

"They will not divide us," he said. "This is what they are looking for and we must all stand together, citizens."

"Tonight, it is the Republic that is under attack with the vile assassination of one of its servants, a professor," he said. "I think tonight of him, of his family. Our unity and firmness are the only answers to the monstrosity of Islamist terrorism. We will stand up."

Blanquer announced Saturday that there will be a national tribute to the teacher, including a minute of silence. "Samuel Paty embodied the Republic in its most noble form: its school," Blanquer said.

"It is a very important emotion for us, for the inhabitants of our town," he said. "I want to have a thought for the family of this professor who was brutally murdered."

The offices of Charlie Hebdo underwent a terror attack in January 2015 that killed 12 people, including eight journalists from the satirical magazine. The trial for the attack is currently underway.

Ricard acknowledged that prior incident on Saturday, saying, "This terrorist crime is the second committed during the trial of the January [2015] attacks. ... This confirms the very high level of the Islamist terrorist threat that we have to face."

Charlie Hebdo expressed "horror and revolt" over the death of the teacher in a statement released on Twitter Friday: "We express our deepest support to his family, loved ones and all of the teachers. ... This foul act grieves our democracy but must make us more combative than ever to defend our Freedom."
Report a correction or typo
Related topics:
abc newsnational
Copyright © 2022 ABC News Internet Ventures.
TOP STORIES
Newlyweds targeted in SF attempted robbery on their wedding day
Amy Schneider's historic 'Jeopardy!' run comes to an end
ICU beds more than 80% full in 5 Bay Area counties, data shows
Teen loses thousands on Zelle after getting offer to be a 'sugar baby'
Justice Stephen Breyer's 'pragmatism' behind decision to retire
All clear given in Hercules neighborhood after lockdown, police say
Here's how you can win free tickets to NFC Championship game
Show More
Triple stabbing suspect killed in Hwy 85 crash, police say
'Jeopardy!' super champ Amy Schneider challenged to trivia on ABC7
San Bruno jewelry store owner confronts smash-and-grabbers
EXCLUSIVE: Mom reacts to murder charge in daughter's overdose
49ers prep for 3rd meeting against Rams this season
More TOP STORIES News