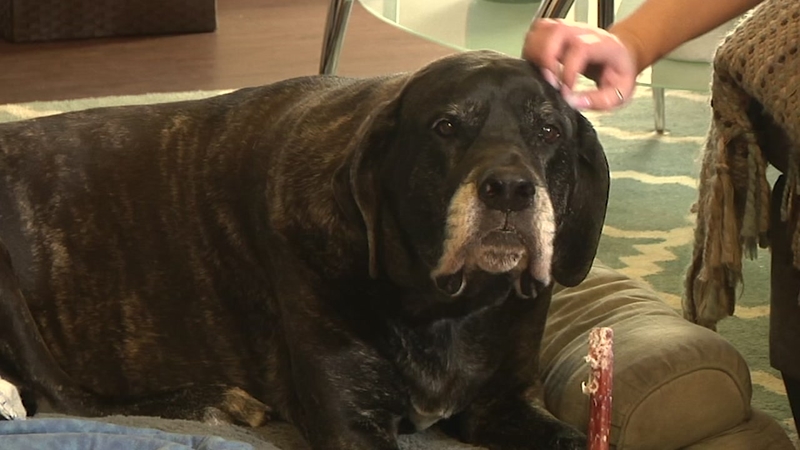 "She's a six-year-old American Mastiff,'' Mazzotti said. "She's 170 pounds, so it doesn't get much bigger than that."

And like a lot of dogs, Bella loves to chew - really chew. So Mazzotti keeps a stash of toys made for big dogs.

Mazzotti says one day, she opened the mint-flavored nylon bone made by PetQwerks of Irvine, Calif.

Suddenly she heard a sound that wasn't normal-- like a snap. Bella had broken off a chunk.

"It's a split second,'' Mazzotti said. "The broken piece is in her mouth, so I try to get the piece out of her mouth and she doesn't want me to do that."

"And it's too late. She swallowed it."

It was a piece less than two inches around so Mazzotti wasn't too worried.

"She's a big dog I thought for sure she would just pass it,'' she said.

That plastic piece was still in her belly. Mazzoti took Bella to the veterinarian.

"The vet had said if she doesn't pass it, it could cause a blockage. The jagged edges could damage her intestines, and if that happened I'd have to take her in for emergency surgery,"

Mazzotti stayed with Bella around the clock, hoping the piece of the toy would come back out.

"I reached out to the company that manufactures them. I wanted them to know that this happened,'' she said.

The toy Bella chewed off is called Flavor-it, a nylon bone made by PetQwerks. Mazzotti wanted the company to reimburse her $71 vet bill, her pay for time off work, and the cost of Bella's special diet. The company apologized and offered to pay the $71, but said it was not at fault.

Mazzotti contacted 7 On Your Side and we reached out to PetQwerks. Company spokesperson Jeff Fowler would not speak with us in person or on camera, but by phone, he said photos of the used toy show Bella had chewed off the end piece of the bone-shaped toy, and Mazzotti should have removed the toy before that could happen. He noted the package has this warning on the back, saying: "Always supervise pet while chewing and remove if damaged."

Mazzotti said she was indeed supervising, and the piece came off in a split second. She points to the company's website which said its toys are made of "indestructible" nylon and are "100 percent safe."

Fowler said the term "100 percent safe" only means the nylon is non-toxic by FDA standards, and it doesn't mean the toys are unbreakable. However, PetQwerks removed the word "indestructible" from its website after 7 On Your Side pointed it out.

What surprised Mazzotti most? Pet companies are not held to any rules for manufacturing or marketing these products. Unlike children's toys, which are heavily regulated, there are no federal standards for pet toys. They are not considered "consumer products,'' and can only be examined by the government if they can harm a human being.

"And that's unfortunate because I don't have children,'' Mazzotti said. "She's like my baby."

"Pet owners should be screaming about this,'' said Lindsey Wolko, founder of the Center for Pet Safety in Virginia. "It's the Wild West out there when it comes to pet products."

She says owners assume if it's on a store shelf, it passed a test.

"It looks like a baby toy or it's cute and cuddly,'' Wolko said. "It's a very sad moment when they finally realize their pet was injured or worse, they were killed. And they say we had no idea this was not a regulated industry. We had no idea this could happen to our pet."

Wolko said she started the pet safety organization years ago after her dog was injured during a car accident. The dog's safety belt failed to rein in the dog when she slammed the brakes, sending her pet flying into the windshield. The safety belt was sold without any government oversight, and unlike human safety belts, is not subject to recall.

Dr. Wailani Sung, a veterinarian with the San Francisco SPCA, said she's treated many dogs who swallowed a toy.

"It wouldn't be uncommon to see a dog at least once a week come into the hospital (after it) had eaten something,'' Sung said. And owners often are unaware until weeks later that their pet had swallowed a toy.

She recalled a recent case in which a family brought in their Burmese mountain dog that had been vomiting for days.

"We took X-rays and we found, like four rubber duckies in the stomach, intact, and he'd just engulfed them,'' she recalled. "And they were like, 'Oh that's where the pool toys went.'"

Sung said regulations would be ideal, but in the absence of any standards, she hopes the industry will improve labeling to include warnings, weight recommendations and other guidance. Otherwise, she said the burden is on owners to carefully monitor their pets - and evaluate toys, and products, on their own.

"I think the best we could hope for is labels,'' she said.

We asked the American Pet Product Association, representing 1,200 manufacturers and suppliers if it could support regulations. In a statement, the organization said it's "difficult to imagine an overall standard" for pet products. However, it added:

"It is in our members' best interest to maximize the safety of their products as consumers today have so many choices when it comes to buying products for their pets, and it is more important than ever to demonstrate a commitment to producing safe, quality products. "

And as for Bella? Well, an unpleasant but welcome noise woke Mazzotti one night. "She had thrown up, and sure enough there was the piece of bone."

There is was. The broken plastic, mottled with bile, but safely upchucked.

"I've never been so happy to see something so disgusting,'' Mazzotti said.