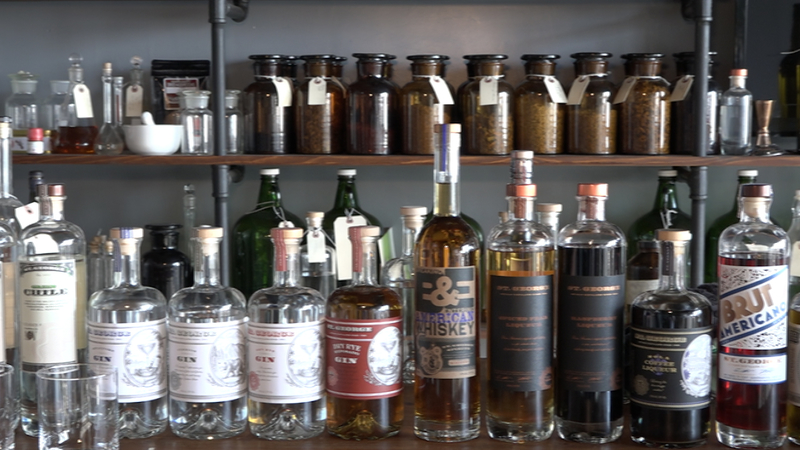 Alameda, Calif. (KGO) -- The Bay Area's own St. George Spirits is known around the world for it's award-winning production of high quality liquors, but what is their secret to success?

A lot of that can be attributed to the men in charge of the Alameda-based distillery: master distiller Lance Winters, head distiller Dave Smith, and founder Jorg Rupf.

Winters and Smith worked for Rupf before taking over the company when Rupf retired in 2010.

Between the three of them they've earned dozens of awards and nominations including being a finalist for the James Beard Award for Outstanding Wine, Spirits or Beer Producer in 2018 and 2019.

The Alameda-based distillery occupies a 65,000 square-foot hangar that was once was a part of a Alameda Naval Air station.

That's where ABC7 News sat down recently with Winters and Smith to talk about where they find inspiration for St. George's world-renowned spirits.

For those who don't know, when did the founder of Saint George Spirits start the company and how did he end up in the Bay Area?
Dave Smith: "St. George Spirits was founded in 1982 by a gentleman named Jorg Rupf and he held from the Black Forest of Germany and came from a family of Brewers and Distillers. Jorg chose to become a lawyer and he was the youngest magistrate in Bavaria in the late 70's. He was working with the German ministry of culture to travel to America and study art and culture here in the Bay Area. He was here he fell in love with the Bay Area and he fell in love with the bountiful harvest and the produce that we have available to us here. After he traveled back to Germany and delivered his report on art and culture in the Bay Area he came back here and founded St. George Spirits in 1982."

How did you become part of St. George Distillery?
Lance Winters: "In 1996 that I showed up here. I been in the Navy for 8 years and when I got out of the Navy I was a brewer and as a brewer I learned about whiskey. I was making whiskey at home and I brought it in to St. George Spirits as my resume and got a job here. A few years later Jorg made me a partner in the business."
Dave Smith:"I was a reformed English teacher. I was pretty proud of my work and I loved it but I was spending a lot of money on alcohol. I have a brother who is a wine maker and I had the opportunity to learn about wine making with him. I had the opportunity to come and learn about spirits from Lance and Jorg and I figured that I would give it a year and I would move on a do something else. I fell down the rabbit hole and I fell in love with it. I came to a place of amazing community and friendship."

What is Saint George Spirits known for?
Smith: "Were the first distillery to legally release absinthe in North America since the prohibition. In most recent years I would say that St. George is most iconically known for our gins but beyond that we are founded as an eau de vie distillery which is sort of a fanciful name for a un-aged fruit brandy. What that does is to inform that point of view about how we approach a category like gin or a category like whisky."

What sets you apart from other distilleries in the world?

Winters:"We are uniquely ourselves and we pour ourselves into everything that we make. Taking that and running with it and delivering that in a faithful way so that if somebody's grabs a glass of it they sense the same thing that you sensed when you first smelled those smells yourself. Nothing Is going to tell that message in the same way as putting it into the glass is. The ones that I really love is when someone's reaction is wow! I never tasted anything like that before. That is what we are trying to do. The goal for us when we are making any of these things is to say something that hasn't been said before."
Smith:"On the clear days I like to tell people that we can see both the Bay Bridge and the Golden Gate Bridge, the San Francisco skyline as well as the Marine Headlands. There's nothing like this anywhere else in the Bay Area."

Where do you find the inspiration for your spirits?
Winters: "If you take the word inspire by itself it simply means to breathe in. I If you are going to be truly inspired by something you have to inhale it and inhale it with all your heart. You are out in the world you are grabbing things and smell them and you take them in so that you can sense them in all the right ways. It is vitally important."
Smith: We have the luxury of living in the Bay Area and being inspired by the produce and the cocktails and the culinary scene around us. To take inspiration like that and hopefully create something unique based on inspiration is an amazing gift and opportunity."