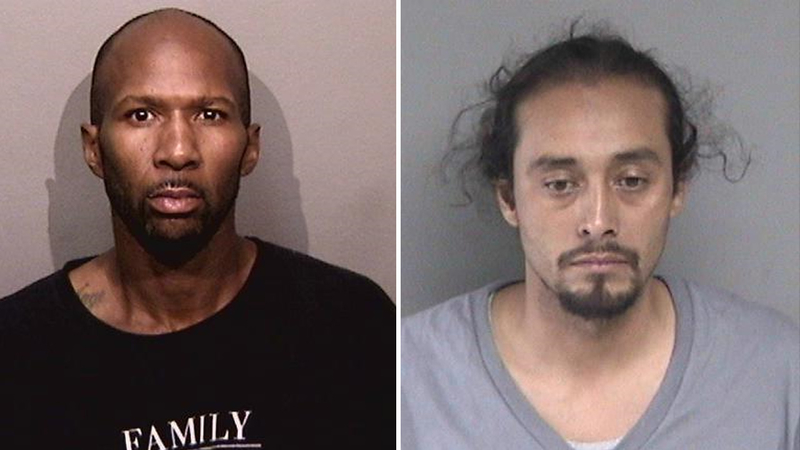 ALAMEDA, Calif. (KGO) -- Alameda police say old fashioned legwork and modern technology teamed up to help them solve the killing of a restaurant owner during an attempted robbery outside her business back in April.

Two men: 39-year-old Donte Holloway, and 38-year-old Paul Paez, both from Oakland, were arrested Monday and charged in her killing.

Cindy Le, who was killed in an apparent Alameda, Calif. robbery, appears in this undated image.

Gee says he hopes their arrests will help bring the victim's family some closure. "This incident changed their lives forever. They don't have a loved one, a wife, a mother anymore."

Surveillance video, taken from a business next door, shows the struggle that ended in Le's death. In court documents, the district attorney says the suspects attacked Le outside the business, trying to steal her purse.

Holloway allegedly used a metal pipe. Paez is accused of punching Le, causing her to fall and hit her head on the pavement causing a fatal injury. Her daughter's boyfriend was also injured while trying to help.

Police say they studied this video and hours of other surveillance video, and automobile databases trying to identify the men responsible.

Court documents say the suspects followed Le from her Oakland restaurant to the one in Alameda waiting for the right time to attack. Under California law, lying in wait before a killing is a special circumstance that could result in the death penalty.

The family of Cindy Le issued a statement on Thursday:

As a family, we would first like to thank everyone that has shown us love, support, and kindness during these last few months. This tragedy has been extremely difficult and painful for our entire family. However, the amount of love and support we have received from this community has helped ease our sorrows and helped restore our faith in humanity. We would also like to thank the men and women of the Alameda Police Department and other law enforcement agencies for their tireless work in locating and apprehending these individuals. While we have heard that the suspects have been arrested, this news only begins to give us a small sense of closure. Our family is still grieving over the sudden, and violent loss of our beautiful mother, wife, and sister. We now put faith in our legal system in obtaining justice for our loved one. For now, we ask that the community continues to respect our wishes of privacy during this difficult time.