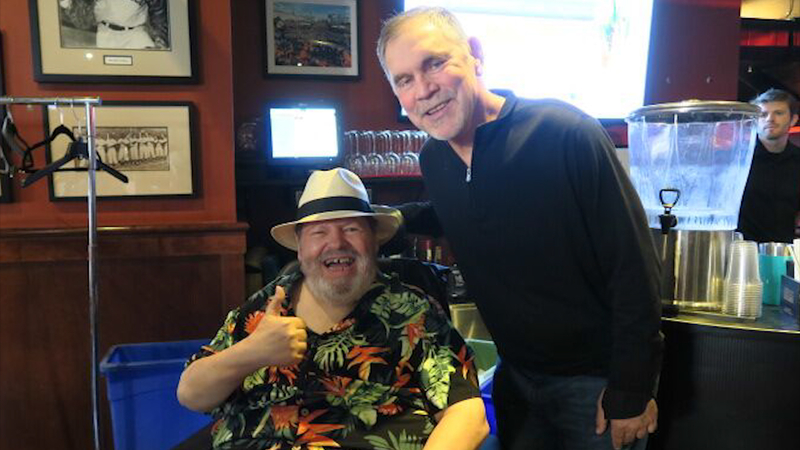 A disease took away his ability to talk about baseball, but writing about the sport helped save his life.

Now, he looks to save others as well.

"I know the precise moment I began falling in love with baseball," San Francisco Giants fan, Chris Mavraedis, said. "It was April 1958 and the newly minted San Francisco Giants were playing their second week in Seals Stadium. I was flabbergasted by what my eyes beheld. It was love at first sight."

Chris Mavraedis has been one of the biggest fans of the Giants ever since that day.

His knowledge of the game is unparalleled.

He just didn't know at that time how strong of a connection he would have to baseball and one of the greatest players of all-time.

"His speech was getting slurry, his left-side arm was getting weaker and his leg, when he walked, would be dragging," Chris' wife, Liz Mavraedis, said. "We would go to several doctors and no one could figure out what was wrong with Chris, except he figured it out himself."

ALS, is a progressive neurodegenerative disease that affects nerve cells in the brain and the spinal cord.

A man who loved to travel and attend baseball games was soon bound to a wheelchair and lost his ability to speak clearly.

That book was "Falling in Love with Baseball."

It shares the details of his love and passion for America's pastime.

24 stories after Willie Mays' number, his favorite player, of memories he has with baseball.

"Chris' mind is as sharp as could be," Giants owner and editor of "Falling in Love with Baseball", Bob Sockolov, said. "He has all the facts. His mind is so baseball oriented, he could tell you things that happened 20-30 years ago and he knows the ins and outs of the science and magic of baseball."

"I thought he was just a regular baseball fan," Giants KNBR Radio Host, Marty Lurie, said. "Then I realized that he has ALS and he's a better baseball fan and a better knowledgeable baseball fan than I could ever be or anyone in my audience."

His book's proceeds help fight the disease that he struggles with on a daily basis.

It can even be found for sale in the Giants dugout store.

Just one of many relationships that Chris shares with his favorite team.

Another one is his friendship with Giants Manager Bruce Bochy.

"He's been such an inspiration with how he's handled it," Bochy said. "You think you've had a tough day then you see him smiling and talking about his love for baseball. ALS has affected way too many young people. So if I'm able to help out in any way, I'm happy to support such a worthy cause."

Chris' smile and trademark "thumbs-up" show people that despite his ailments, he continues to battle.

"Yeah, he keeps fighting," Liz Mavraedis said. "He is strong."

One way he fights back is by doing his part to raise funds and awareness along with the ALS Association Golden West Chapter to eradicate the disease.

This included a fundraiser held in May at San Francisco's little piece of baseball heaven.

"Chris Mavraedis, who is diagnosed with ALS, and his wife Liz, who is also living with ALS as his caregiver, are extraordinary examples of what one couple can do to raise awareness and raise funding," ALS Association Golden West Chapter President & CEO, Fred Fisher, said.

"Community outreach events, like today's event at Cooperstown SF, are important not only for raising critical funds to benefit research, public policy and care services in the area of ALS, but also, for building awareness and community," ALS Association West Chapter Community Outreach Vice President, Asher Garfinkel, said. "It's people like Chris who step up and decide to put things on like this for us and we can't do it without people like Chris."

Chris has inspired so many in his community, the Giants organization and the baseball world with his story.

And while Chris has faced curveballs and maybe the biggest knockdown pitch ever, he has never lost his passion for baseball or life.

"ALS is a terrible, cruel disease that devastates the life of many, many families that are affected," Chris said. "The battle to end ALS rages on and I am determined to make a difference while I can."

For more information on how to get involved to help cure ALS through the work of the ALS Association Golden West Chapter, you can visit their website here.