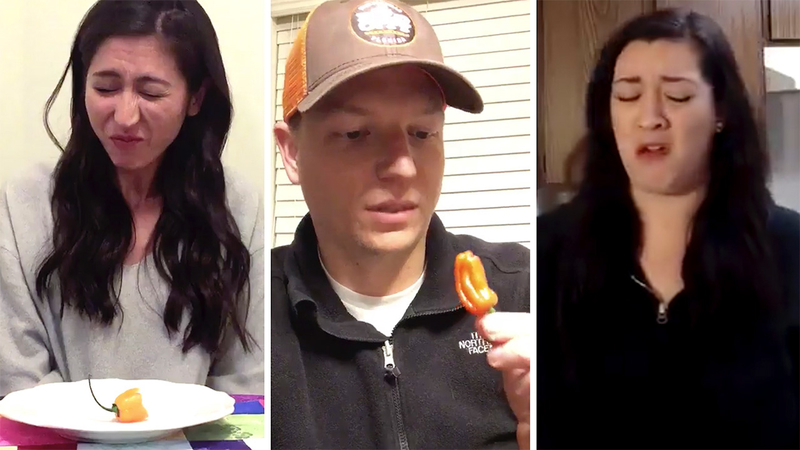 CHARLOTTE, NC -- Over the summer of 2014, millions of people doused themselves in ice water and challenged their friends to do the same or make a donation to fund ALS research. Dubbed the ALS Ice Bucket Challenge, it quickly became a global phenomenon, raising $115 million in eight weeks.

While other people have performed similar versions of the pepper challenge in the past, this iteration has been championed by sports journalist Tom Haberstroh. Participants are challenged to share a video of themselves eating a hot pepper (habaneros and jalapeños have been favorites so far) with the hashtag #ALSPepperChallenge or make a cash donation to the ALS Therapy Development Institute, a drug discovery center in Massachusetts focused solely on ALS research.

The challenge began in December, weeks after Haberstroh's mother, Patty, was diagnosed with ALS. A social worker and mother of four, she had spent her life helping others. Her family used the diagnosis as an opportunity to give back.

The family chose peppers for their challenge as a riff on Peppermint Patty.

"Few things in this world are more human than eating a hot pepper. It makes you feel alive," the family quipped on the challenge's fundraiser page.

While the family originally hoped to raise $50,000 in 90 days, they reached their goal in just a month and have since upped their fundraising ambitions to a cool $1 million.

The challenge has especially taken off in the sports world - a given considering Haberstroh's line of work.

"My family visited ALS TDI in Cambridge, Mass., a couple weeks ago and watched Erik Spoelstra, the two-time champion [Miami] Heat head coach, do the challenge on the projector screen at the lab. It was incredibly moving and life-affirming for my mother to see them rallying around us," Haberstroh told ABC. "We thought maybe in a year of this we could luck into Charles Barkley and Spoelstra maybe doing this. It took like three weeks."

Much to the delight of Haberstroh's mother, Andy Cohen, Sharon Osborne and Nancy O'Dell have also joined in.

While an ALS diagnosis is never an easy thing to cope with, Haberstroh said the response to the challenge has made the process easier.

"This whole movement has really raised her spirits. From what my mother says, being diagnosed with ALS is a very lonely experience. Having this community back us is so motivating. We are lifted by their response," he said.

As people around the world chow down on peppers, Haberstroh said his family is taking things day by day.