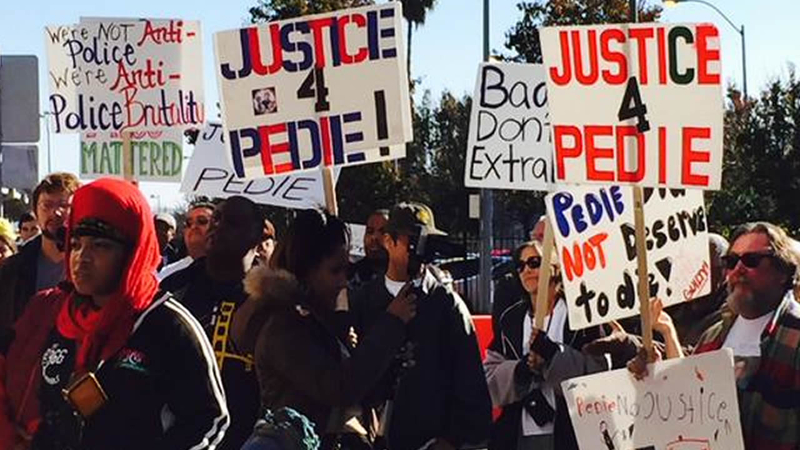 OAKLAND,Calif. (KGO) -- January 1, 2015 marks the sixth anniversary of one of the Bay Area's most controversial officer involved shootings.

A BART police officer shot and killed 22-year old Oscar Grant on the platform of the Fruitvale station early on New Year's Day in 2009.

On Thursday, his family and hundreds of others gathered to mark his death in the context of all that's happened since.

About 200 people gathered at Fruitvale BART Station for vigil on 6th Anniv. of police shooting of #OscarGrant #mapit pic.twitter.com/Vztc6WIQN2

Grant's mother Wanda Johnson could hardly believe it's been six years since her son was shot and killed by a BART police officer. "I know Oscar is looking down and he's smiling, seeing a whole sea of people getting together to celebrate him and to celebrate life," she said.

Grant's killer, former BART police Officer Johannes Mehserle, who said he meant to use his Taser stun gun instead of the gun he used to shoot Grant, was convicted of involuntary manslaughter and sentenced to two years in prison, minus time served. He was released from custody in 2011. Since then, other unarmed black men have been killed by police officers but a different outcome.

"Many young black and brown men are being killed at an unprecedented rate across the United States so it's really a heart-aching feeling to experience and relive on a consistent basis," explained Cephus Johnson.

Over 200 people came out to attend this vigil, without a demonstration or march.

Grant's family appreciates those efforts in Oakland and across the country, but also believes a long-term solution could come in a different form.