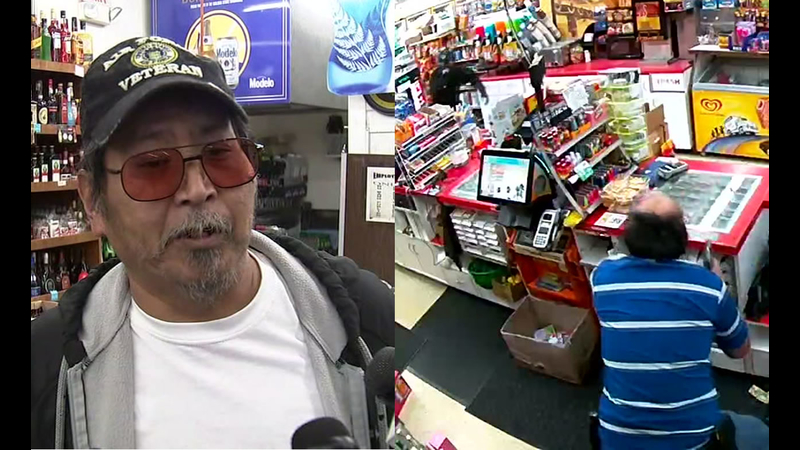 BAY POINT, Calif. (KGO) -- A clerk at Kam's Market on Port Chicago Highway at Lynbrook Street in Bay Point was violently attacked during a robbery at 11 p.m. Sunday and ended up shooting and killing one of the two intruders.

In surveillance video, you see the armed robbery suspect hit and knock down the clerk and then go for the cash in the drawer. Mark Kasbrowicz is the clerk and later watched this dramatic video.

"I was certainly in shock when I saw the video. I didn't know how serious it was until I actually saw it," said Kasbrowicz.

We just talked to the clerk who was pistol whipped during a robbery last night. He says the ER nurses told him they could see the imprint of the gun in his head. He is ok. He shot and killed his attacker. pic.twitter.com/0yfIbSYGRi

The owner of the store says another attack was happening off camera.

"There were two guys. One was holding onto my other employee in the back with a gun and one came around here to try and rob us," said store owner Kamal Sandhu.

Kasbrowicz went down, but he didn't down for good; he crept back up, got pushed but didn't give up and then grabbed the store's gun.

"I don't know if it was fear and adrenaline kicked in together, but I tried to protect myself a little. He forced me onto the ground, he held me down," said Kasbrowicz.

That's when the situation escalated -- the intruder started to hit Kasbrowicz and the gun went off. The robber started to run and then you hear another shot -- Kasbrowicz shooting the robber, who later collapsed and died. The second man got away. Kastrowitz has 12 staples in his head- he hasn't thought too much about the man who died.

"Sure he is deceased now but then again I'm lucky to be alive, I am lucky my co-worker is alive," said Kasbrowicz.

Ironically, the store has a sign above the counter that reads "No trespassing. Violators will be shot. Survivors will be shot again." Sandhu says he bought it years ago from a Blockbuster video store that was closing. It was always meant as a joke.

Kasbrowicz says this will not keep him from doing his job. He is ready to back to work as soon as possible.

This sign says it all. A clerk at Kam’s market in Bay Point shot and killed an intruder who pistol whipped him and was grabbing money from the register. The clerk was taken to the hospital to get stitches - he is ok. pic.twitter.com/MDwe2lt260