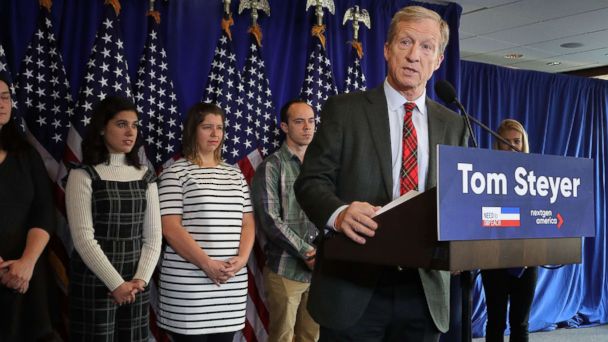 "The Blue Wave program is basically a way for people around the country to focus their energies on the congressional districts and the states that are going to make the difference in 2018," Steyer said during a Facebook Live announcement.

Five years ago, Steyer founded NextGen America, a civic action group whose focus includes impeaching President Donald Trump -- a cause that more moderate Democrats aren't so sure about.

Now, the group seeks to take its efforts to the midterms with the Blue Wave program, which aims to help Democrats regain control of the House by engaging volunteers to call and text voters in swing districts from the "comforts of [their] own home."

"It's really a chance for us to have a more effective democracy and to promote the kind of grassroots voter-to-voter conversation and contact that's driven American democracy since the very start of our country," Steyer said.

Despite Steyer's efforts to help Democratic candidates win this fall, he has clashed with party leaders over his pro-impeachment campaign, a cause that House Minority Leader Nancy Pelosi allegedly called a "distraction." She urged Democrats to focus on policy issues instead, such as the party's "Better Deal" economic agenda.

But as Steyer tours the country hosting town halls on behalf of Need to Impeach, an organization he founded last fall, the California billionaire did not appear to heed to Pelosi's advice.

Complete with big rallies, direct voter engagement, and a point-blank message, his campaign to fuel anti-Trump sentiment may, in itself, be "downright Trumpian," according to the Christian Science Monitor.

It could even symbolize a possible 2020 presidential bid by Steyer, who previously considered running for Senate or governor this year in California but decided against it.

"Do we have to report this as an in-kind contribution?" he tweeted Thursday morning, implying that the initiative could actually help Republicans this election season.

During the Facebook Live announcement, Steyer spoke of saving the country from a "radical right-wing conspiracy that's taken over our government."

"Republicans control Congress, Senate, White House, Supreme Court, two-thirds of governorships, and two-thirds of legislatures, so we are starting from the very bottom," he said. "What we can do in November is take that first step back to start to get the people's rights recognized again."
Report a correction or typo
Related topics:
abc newsnational
Copyright © 2020 ABC News Internet Ventures.
More Videos
From CNN Newsource affiliates
TOP STORIES
Women's March 2020 takes place throughout Bay Area