It's estimated that Americans take home about 1,500 plastic bags each year. And in our area, here's many of them end up at the GreenWaste Recovery center in San Jose. Film plastics, as they're known, can be difficult to recycle.

"Dirty film plastics, as soon as it's covered in food waste or what we call putresible waste, there isn't a market for those materials, so that segment of the film plastic has always gone to landfill," said Emily Finn, director of business development and communications at GreenWaste Recovery.

However, a laboratory in Menlo Park aims to change that. BioCellection is a startup that has developed a process that turns polyethylene into chemicals. The chemicals are then sold to companies that use them to make a wide range of products, from padded jackets and auto parts to perfume. Despite efforts to ban plastic bags, there is more plastic entering the waste stream.

"A lot of packagers are moving away from glass and cardboard and moving to plastics, which is much cheaper," said Miranda Wang, co-founder & CEO of BioCellection. "So we're actually seeing an increase in polyethylene."

The City of San Jose and GreenWaste will partner with BioCellection so these plastics don't end up in a landfill with an investment of $240,000 for a one-year pilot project.

The two scientists who co-founded BioCellection are both 24. They started working together as high school students in Canada. Jeanny Yao is the chief technology officer while Miranda Wang is the CEO.

The process they developed not only helps to solve what to do with certain plastics, but also create a new source of chemicals that otherwise require petroleum to make.

BioCellection plans to locate labs on-site that will allow the chemical process to be done at recycling centers in a mobile facility no larger than two parking spaces.

With the partnership with the City of San Jose and GreenWaste, the team at BioCellection believes they'll be in full-scale production by next spring. 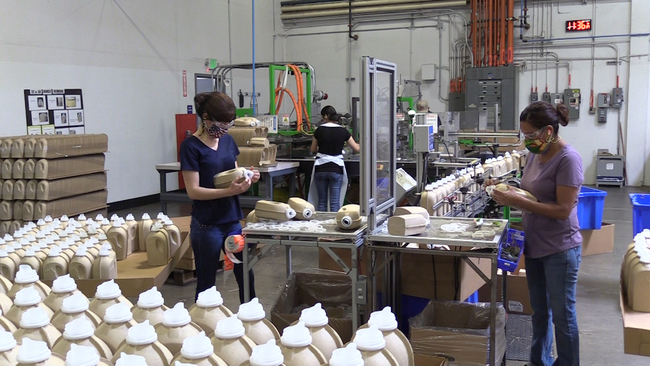 More recyclers shut down during pandemic. Here's how to get your deposits back
More Videos
From CNN Newsource affiliates
TOP STORIES