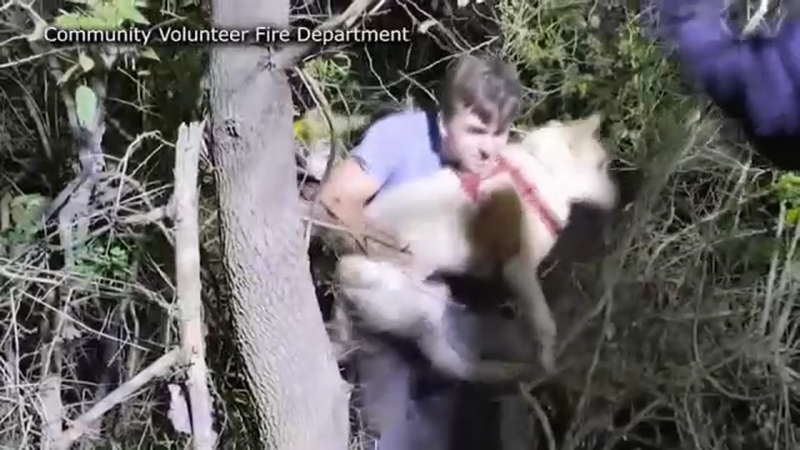 HOUSTON, Texas -- A 16-year-old teen has a Community Volunteer Fire Dept. and his Find My iPhone app to thank for his safe return.

Josiah Tromantore loves the outdoors, loves his dogs, and takes them as often as he can to George Bush Park to run-off leash.

Saturday, his walk required a helicopter, a pair of drones, and the fire department to bring him and his pets home.

Bella and Cody, his dogs, ran off while he walked with them on the levee at the edge of the park.

"I went after them," he said, in a raspy voice.

"I was looking for them and went deep into the brush, with thorn bushes studded with long barbs," Josiah said.

The search ended with the dogs returning, but by then, Josiah was in trouble.

"I was crawling army style in swamp waters and getting all cut up. I was taking a break under a tree, and called my mom, and said, 'We're done, we can't get out.'"

His parents called 911, which led to a constable's office trying to locate him. But the brush was too thick and treacherous.

A helicopter with heat sensor technology located his position, but the woods were too thick for a physical sighting.

In the end, it was the GPS on his iPhone that zeroed in on where he was, but it took a lot of chainsawing by firefighters.

"It's wilderness," said Assistant Fire Chief Johnny Mitchell. "It can be dangerous. It was getting dark and it's like being in a house fire filled with smoke. You don't know where you're going. It's that thick."

Complicating the rescue, one of the dogs was protective of his owner and stood between Josiah and those who were trying to bring him and the pets to safety.

Josiah eventually had to carry the Husky mix in his arms.