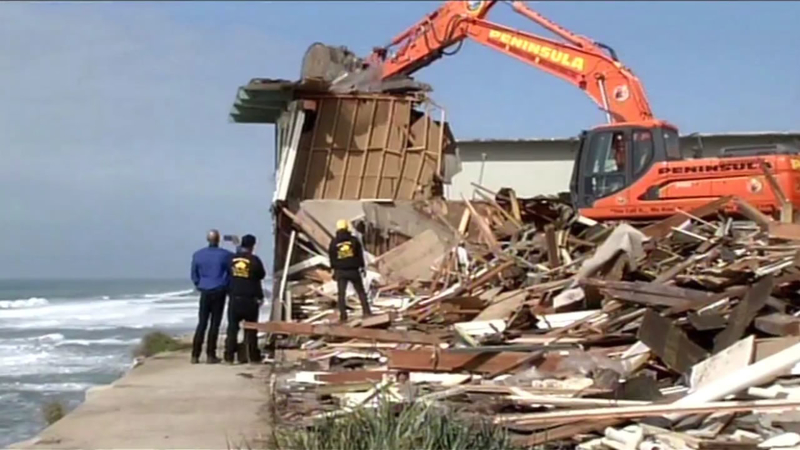 PACIFICA, Calif. (KGO) -- An apartment building Thursday was finally being demolished in Pacifica six years after it was red-tagged as the cliffside it sat on crumbled away. Neighbors are wondering what's next for two other properties down the block.

An apartment building on 330 Esplanade Avenue was demolished by its owner Thursday nearly six years after being red-tagged. Neighbors are wondering what's next for two of the other properties on the block.

Demolition crews hope to be out of the area Friday afternoon. So far, it's been a pretty smooth process. Built back in 1962, but deemed unsafe in 2010, neighbors say they're glad that something is finally being done.

It's a remarkable scene that drew many people James said.

"We had no idea they were coming down today, but it's really going fast," said Jackie James, a Pacifica resident who lives next door to what was once 330 Esplanade Apartments. "I tell my friends that we are clinging to the edge of the continent by our fingertips."

All that's left are piles of wood, plastics, and appliances, a reminder of a building that eventually lost its battle against nature.

"Been here since they used to have 30 to 40 more feet of cliff there, and every year I've seen it go, more and more," said Ken Keller, a Pacifica resident.

The building was red-tagged nearly six years ago because of the erosion of the cliffs along Esplanade Avenue, but it wasn't until Thursday that it was finally torn down. Pacifica officials say they granted the demolition permit last week after a contractor cleared the building of asbestos. The work is being paid for by the property owner.

Questions remain about what'll happen next to two of the adjacent properties managed by a different owner who recently declared bankruptcy. 320 Esplanade was red-tagged in 2010, but the city does have approval from the council to take emergency action on it, if necessary. 310 Esplanade, which was just evacuated in late January, is also teetering on the edge.

Some neighbors are hopeful it won't be *another six years before those buildings are brought down.

"The buildings have been sitting for so long, with nothing going on, and it's nice to see the space open up," said Gretchen Wengenroth, a Pacifica resident.