KGO
SAN FRANCISCO (KGO) -- If you've ever watched the seagulls circling the mountain of trash that's piled high at the Altamont Landfill, you'll have a good idea of why San Francisco introduced its citizens to the "Fantastic Three" some 15 years ago.

VIDEO: See what new items you can throw in the recycling in Sf

"Three equal sized bins: a black one for landfill, a blue one for recycling and a green one for composting," explained Recology's Paul Giusti, who manages community and government relations for the company where he once drove trash trucks himself years ago.

San Franciscans are now recycling and composting more than ever, he says, but the system can be confusing. Most coffee cups can go in the green bin, but their lids often belong in the blue bin. Soup cartons and bubble wrap couldn't go in either, and wound up in the landfill. But now, that's changed.

"We are making the Fantastic Three even more fantastic," said S.F. Environment director Debbie Raphael over a bicycle-powered loudspeaker at a press conference near City Hall.

Starting immediately, coffee cups (including their plastic lids and cardboard sleeves) can go in the blue recycling bin, along with foil-lined cartons, waxed paper cups, ice cream pints and plastic wrap, as long as all of the items are packed together in a plastic bag. The changes will come with new, larger blue bins -- twice the size -- that will roll out to neighborhoods over the next two years, accompanied by a smaller black landfill bin -- half the size. The new black bins have a false bottom -- a psychological cue, says Recology, to remind people there's not much room in the landfill, and a lot of room to recycle more.

In the neighborhoods where the new bins have already rolled out, Recology says it's seen 10 percent more recycling and 10 percent less trash sent to the landfill over the past five weeks.

"San Francisco is on its way to get to zero waste," said Board of Supervisors President London Breed, who demonstrated some of the new recyclable items, and took great joy in popping the bubble wrap.

The new bins will require reconfigured trucks: a truck with two compartments to handle the compost and landfill bins, and a dedicated truck for recycling. Recology says it's making the switch without changing pickup days -- a feat it credits to computer-assisted routing.

Technology is also behind the broader range of materials they can recycle: Optical scanners can detect shapes and textures, making it easier to sort and separate the paper from the metals and plastics. In the end, though, people still do a big chunk of the work: Giusti says Recology has doubled its workforce at San Francisco's recycling center from 100 to 200 employees since it opened. In short: recycling creates jobs.

Supervisor Katy Tang will be the first to get larger recycling bins in her district. pic.twitter.com/G4EmLRx79D

Raphael says it's a good reminder that human hands have to touch what you recycle. She's asking San Franciscans to clean out the containers they throw in the blue bin, leaving the food scraps in the green bin.

"The new best friend is your spatula," she said. 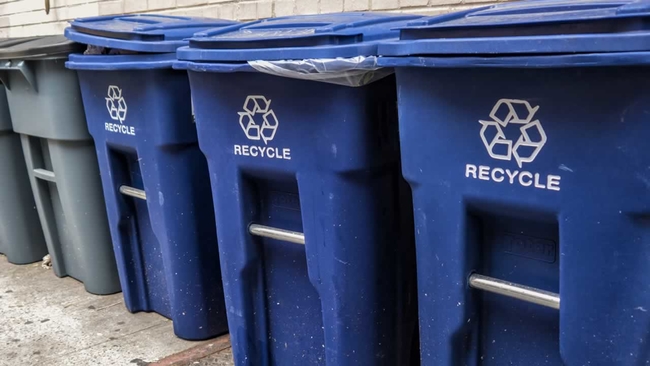 VIDEO: See what new items you can throw in the recycling in SF
More Videos
From CNN Newsource affiliates
TOP STORIES