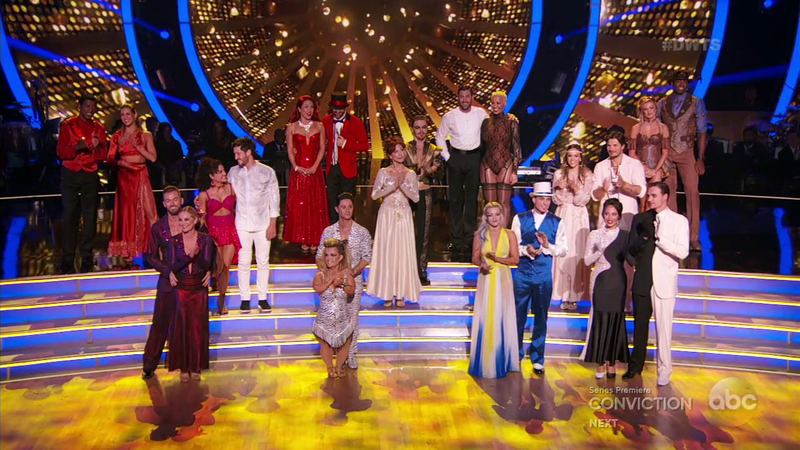 LOS ANGELES -- "Dancing with the Stars" pulled off one of its biggest theme shows ever.

And the circus fun led to our first perfect score of the season!

Here's a rundown of the dances, from highest to lowest score:

Laurie Hernandez: 30 out of 30
Can we just give Laurie and Val Chmerkovskiy the trophy now? And everyone else can compete for a second trophy? Their jazz routine from Cirque du Soleil's "Michael Jackson One" show is one that will be remembered for a very long time. Judge Carrie Ann Inaba praised the 16-year-old's maturity in the routine and said "A star is born!" Bruno Tonioli called the routine killer thriller stunning; and Julianne Hough was literally left speechless.

James Hinchcliffe: 28 out of 30
The Indy Car driver might have come into this competition as a dark horse but he's certainly proving himself week after week. He and Sharna Burgess have a very fast quickstep... with acrobats along for the ride. Bruno told the duo they are like Fred Astaire and Ginger Rogers when they are in hold; Julianne praised his charisma and called James the real deal; and Carrie thought he was able to bring together every element that represents DWTS - fantasy, glitter, showstopper, magic!

Terra Jole: 25 out of 30
The good news: Terra is a crazy Cirque du Soleil fan. The bad news: she is amazingly hard on herself. Terra has not been able to accept the fact that she is absolutely turning into a dancer. Sasha Farber is trying to hammer it home. They did have the very tough samba to learn. But learn it she did and then some! Carrie Ann thinks Terra is in a league of her own and loves the way she is able to dance beyond her body; and Julianne called her inspiring.

Maureen McCormick: 24 out of 30
While we're on the subject of people who are hard on themselves - it's almost painful to watch Maureen's self-doubt. Artem Chigvintsev said in a rehearsal that the honeymoon is over. He was getting frustrated with Maureen; she was feeling frustrated that she was letting him down. Tears! But what the video didn't show us was the two working things out because obviously they did and she turned in a great Argentine tango. Bruno thought Maureen looked like a 1920s movie queen; Carrie Ann complimented their connection; and Julianne encouraged her to embrace her struggles and lean on Artem and he'll pull her through.

Amber Rose: 24 out of 30
There was some awkwardness between Amber and judge Julianne from last week that played out. Amber thought Julianne body-shamed her; Amber took to social media to vent her frustrations; Julianne tried to explain herself; in the end they apologized, said they were all here for the dance, and that was that. Amber and Maks Chmerkovskiy had a tango that allowed her to embrace her body and her sexuality and it worked. Bruno thought the presentation was beautiful, as well as hot; Carrie Ann told Amber she showed us all of her beauty inside and out and she was a pleasure to watch; Julianne thought she was authentic and delivered on the dance floor.

Jana Kramer: 23 out of 30
Jana had a tough week with lots of real life commitments that cut into dance rehearsal. That left her stressed out and frustrated but Gleb Savchenko seems to be her dance whisperer and was able to calm Jana down and bring her out of her funk. They did a foxtrot to a song from the Beatles Love show, and Carrie Ann loved the choreography and expressiveness; Bruno called the dance stunning but wants Jana to watch her tension; and Julianne wants to see the duo break out of the middle of the pack (guess not this week!)

Calvin Johnson Jr: 23 out of 30
Calvin was last week's top scorer and had to dance first this week. That's always a tough spot! Lindsay Arnold choreographed a very, very fast Charleston and while he seemed out of breath a few times in rehearsal he was nothing but fluid in the ballroom. Julianne gave him the nickname Twinkletoes because he's so light on his feet for a tall guy; Bruno coined the phrase that Calvin is turning into a "Marvel Agent of Fun"; and Carrie thought he had fantastic footwork.

Vanilla Ice: 23 out of 30
They really set us up to think Vanilla Ice was going to have a bad week. He had five concerts in five cities and was traveling all week. ALL WEEK. He didn't get to the ballroom until MONDAY. Add the fact that he and Witney Carson had a Viennese waltz and the odds were not in their favor. Psych! He pulled it off! All the judges encouraged him to stick with it and keep working because he's been showing much improvement every week.

Ryan Lochte: 22 out of 30
Ryan and Cheryl Burke also had the Viennese waltz and while he is getting better at getting the steps, his pro partner let him know he needs to really get into character and sell it! Carrie Ann thought he was steady and encouraged him to stay moving in this direction; Julianne can tell he's listening to their notes and showing them he wants to improve; and Bruno told Ryan this was his best performance to date.

Marilu Henner: 21 out of 30
It was a Paso doble for Marilu and Derek Hough. He was honest with his partner and told him his big worry with her is consistency. She'll do great in a rehearsal, and then the next time around she's stumbling. Julianne encouraged Marilu to get out of her head and feel the dance just don't do the dance; Carrie Ann let her know she has everything it takes for the win - grace, agility, fitness, expressiveness. She just needs to learn to combine it all and bring it to the ballroom. Carrie Ann also thinks Marilu is dancing NEXT TO Derek rather than WITH him. Deep stuff!

Kenneth "Babyface" Edmonds: 18 out of 30
And lastly there's Babyface and Allison Holker. Their tango to another song from Beatles Love didn't have all the bells and whistles (and acrobats and fire throwers) that other couples had. It was all about mood and lighting. And to that end, something went wrong, and they just couldn't hit all their marks. You could see the exasperation all over his face. The judges all gave him an "Atta-boy" and hoped he'd be back next week to try again.