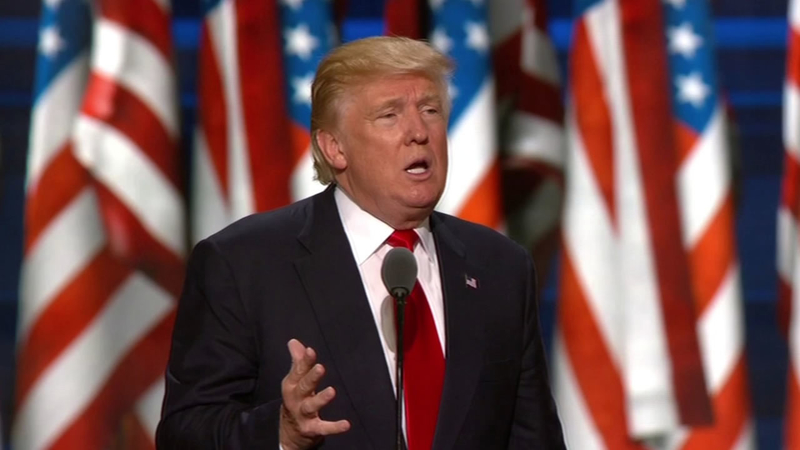 CLEVELAND (KGO) -- Donald Trump accepted the Republican nomination for president telling a nationwide audience that he is the voice for forgotten Americans.

Donald Trump delivered a lengthy address clocking in at one hour, 15 minutes and 8 seconds, the longest convention acceptance speech since Bill Clinton in 1996.

He was introduced by his eldest daughter Ivanka, who promised her father would be a president for all people, not just the rich and well-connected.

"Only my father will say, I'll fight for you," Ivanka Trump said.

Trump painted a picture of a deeply troubled America that is behind both economically and politically and he said only he can fix it.

"Tonight, I will share with you my plan of action for America," Trump said.

He did offer policy positions on national security, trade, immigration, the economy and law and order.

"The crime and violence that today afflicts our nation will soon come to an end. Beginning on January 20, of 2017, safety will be restored," he said.

He tried to appeal to the LGBT community.

"As your president, I will do everything in my power to protect our LGBT citizens from the violence and oppression of a hateful foreign ideology," Trump said.

Trump's speech clearly thrilled those at the convention, but will it be enough to unite a Republican party that seemed badly fractured just a night ago?

"So far, I think he's done a good job and over the next four months I think you'll see the party coalesce," said Makan Delrahim, a California delegate.

"I think we're very united and we're bringing in a lot of people we haven't seen in years, Reagan Democrats and a lot of independents," said Calif. Autumn Stoff.

"I thought it was extraordinary. I thought it drew the lines very clearly and I thought it appealed to every American of every background," said former House speaker Newt Gingrich.

For the most part Trump stuck to his prepared speech and stayed with his message, but the question remains if that will continue to resonate with voters.