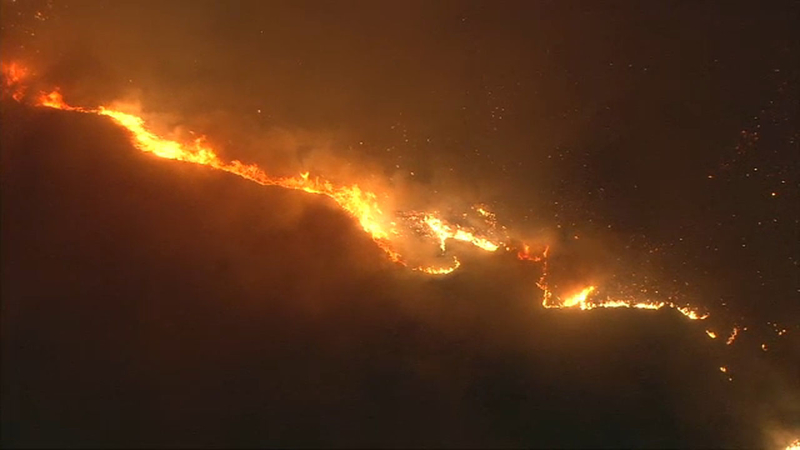 Ventura County authorities ordered evacuations that covered 8,000 people and 2,300 structures as the blaze threatened the community of Somis.

The blaze, dubbed the Maria Fire, exploded to about 9,000 acres by noon with 0% containment.

#MariaFire Evacuation orders are in place see https://t.co/VIOmbbHzMc for additional details. There you can type in your address and know if you are in an evacuation area. pic.twitter.com/lVJIVOz9nG

It was reported around 6:30 p.m. Thursday on top of South Mountain in Ventura County, an area surrounded by cellphone transmission towers.

By Friday afternoon, the biggest concerns for firefighters were hot spots flaring up and winds shifting direction.

"We are finding that the winds are starting to change and that presents its own challenges by itself," said Ventura County Fire Chief Mark Lorenzen.

The mandatory evacuation zone includes Highway 126 as the north boundary, Los Angeles Avenue as the western boundary, Balcom Canyon Road as the east boundary and Highway 118 as the southern boundary.

An evacuation center was established at the Camarillo Community Center at 1605 Burnley Street.

Road closures were also in place for the following areas:

The inferno started high on the mountain ridge, as flames slowly crept down and "provided us time to get into the communities and start our evacuations," said John McNeil with the fire department on Thursday.

With winds pushing in the other direction, some residents decided to shelter in place instead of evacuating, keeping a close eye on the nearby flames.

But Jayne said he was still prepared for the worst.

"We had our cars all loaded up and ready to go at the last minute we needed to," he said. "It wasn't anything like (the winds) Wednesday. Would've been terrible on Wednesday."

As the sun rose over Somis Friday morning, heavy smoke lifted into the air from the blackened hills. Firefighters and residents are hoping that's where the Maria Fire will eventually run out of fuel.

Given both the diminished winds and conditions that have reduced the fire's ability to move downhill, some residents said they were confident there was very little threat to their homes.

"It's scary in one respect, but since we already did all this in 2002, we knew that we were protected," Somis resident Sandra Robertson said. "I just have to say, these fire people and everything, give them a huge kudo because they are really, really great. They have protected us this time as they did last time.

Fire crews launched an aggressive assault from the air but had to postpone the aerial battle as someone was flying a drone over the fire.