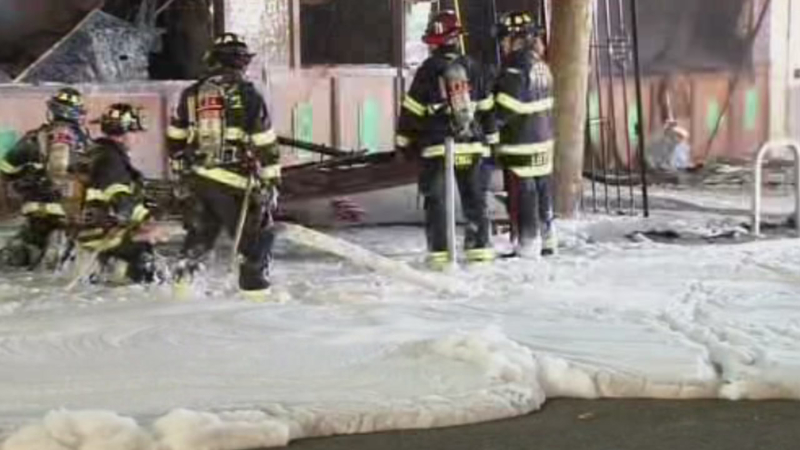 BERKELEY, Calif. (KGO) -- Firefighters responded to two fires at a restaurant within a six-hour span early this morning near the University of California at Berkeley, a fire official said.

The one-alarm fire was found in a kitchen and extinguished, McCracken said.

Crews cleared the scene around 3 a.m., but returned about two-and-a-half hours later to a report of another fire at the same location and quickly called for a second-alarm response, according to McCracken.

"We don't know if it's a rekindling of original fire or a new fire, but it might be hard to determine now that this building is destroyed," said McCracken.

Firefighters had to spray down water on the fire from outside the restaurant due to heavy flames and were able to extinguish a bulk of the blaze, she said.

As of about 8:30 a.m., firefighters were still looking for hot spots and did not declare the fire under control, according to McCracken.

Occupants of two neighboring apartment buildings were evacuated from the units and are temporarily taking shelter at a hall at the UC Berkeley campus, McCracken said.

"It was definitely frightening," said Michael Henderson, who lives in the apt building next door and who was told to evacuate. "I got a knock from the upstairs neighbor who noticed the flames were leaping high."

The apartment buildings didn't sustain damage from the fire, but firefighters had to force entyr into a commercial space near the restaurant to check for any fire extension, said McCracken.

It's not clear if the second fire started in the restaurant's kitchen and or if there's a connection between both blazes, McCracken said.

The restaurant sustained severe damage and the roof partially collapsed, she said.

No injuries were reported. The cause of both fires is under investigation.