1,000 rally to reopen businesses in Fresno County, many say they will open again Oct. 1

The speakers represented a group of local small businesses that say they plan to open on October 1 in defiance of rules set by local and state officials.
KFSN 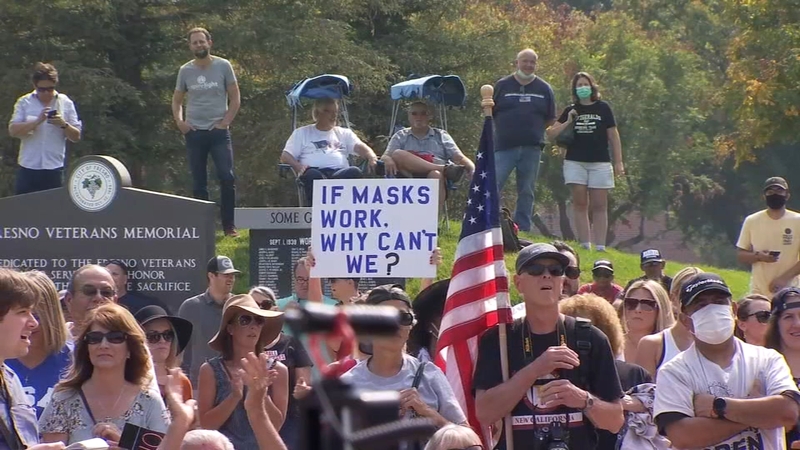 FRESNO, Calif. -- Frustrated and fired up business owners showed up for a rally at Fresno's City Hall on Monday calling on city, county and state leaders to allow stores and restaurants to reopen.

The event felt like a political rally, but the business owners that spoke said that something needs to change if their stores and restaurants are going to survive. The speakers represented a group of local small businesses that say they plan to open on October 1 in defiance of rules set by local and state officials.

"This is not something we're willing to wait for and here's another thing, we're not asking, we're telling you, we're opening safely on October 1, thank you very much," said restaurant owner, Lewis Everk.

For two hours, 20 speakers, including politicians, local business owners, and Fresno native Erica Kious, who owns the San Francisco salon where House Speaker Nancy Pelosi was recorded on surveillance video getting her hair done last month. While some of the speeches felt political, many tried to keep the focus on struggling business and restaurant owners on the verge of closing, who shared their stories and their last ditch effort to survive.

"I don't consider myself a hero. I'm just a mother with two children trying to support my family," Kious said. "Being shut down for six months is just too long. We were supposed to open midsummer and a lot of us restaurant workers, salon owners, spent almost the last of our money to reopen our businesses safely and got denied."

"Just about everybody is back but they are working one to two days a week. They are on a part-time basis one day a week, eight hours a day; that's about all we can afford to spare right now," said Mohammadi.

"People have to remember these business owners don't get unemployment. There's no other way to make a living when the government forces you to shutdown. Employees can go get unemployment, restaurant owners get nothing," said Miller.

Lorenzo Thomas works in a local hospital and when he finished his shift Monday, he came to support those impacted by the shutdown.

"Knowing that this is all political and it's hurting a lot of businesses and a lot of people for no apparent reason. It's just, it's unfortunate, so that's the reason why I'm out here," said Thomas.

Other local political leaders also came out to show support to businesses who are hurting.

"When it did come down, when we did flatten the curve, we felt it's time they needed to go back to work, so I just support mom and dad's who have children. A lot of these are small businesses," said Clovis City Councilmember Vong Mouanoutoua.