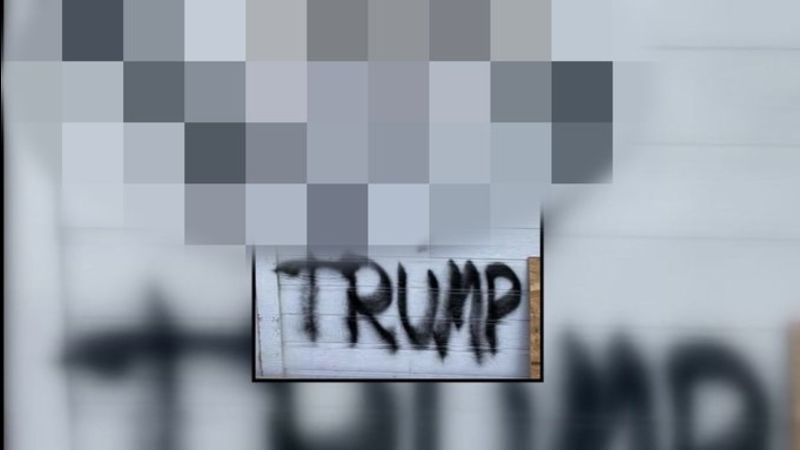 LAFAYETTE, Calif. (KGO) -- Police are investigating a possible hate crime in Lafayette, as a swastika and the word 'Trump' was spray painted on someone's garage. That was one of two similar incidents in the East Bay, and now the FBI is involved.

That woman didn't want to show her face out fear that vandals would come after her. She lives near Katie and Robbie Peacock, whose home was hit.

The Peacock's have a Joe Biden flag flying outside their house along with an anti-President Trump sign. In fact, while we were speaking with them, community members showed up with flowers and a new Biden-Harris sign. Many didn't want to speak with us out of fears of retaliation.
"I just don't think it's kids, I think it was Trump supporters walking around," said the neighbor.

The Peacock's sent us a statement that read, 'Let this message of hate and violence underscore the importance of how we all show up in this moment. We have 7 days until the next election. Seven days to choose love over hate, unity over division, and bravery over fear. Seven days to protect our children's future and to make our parents proud. Get out the vote. Donate to the senate races that matter most, and to the organizations committed to defeating hate in America. Together, we can do this - and we will.'

Several miles down the road a similar vandalism Tuesday that said 'swastika equals Trump equals ACB equals swastika.' That has since been painted over and a sign put up that says 'Love Trumps Hate'.

The Peacock family has also painted over the graffiti. The Lafayette mayor and police issuing a joint statement saying, "There is no place for hate in Lafayette" but not saying who they think did this. No suspect description has been released and police have reached out to the FBI for their help."

Here is the full joint statement from the mayor and the police department:

Today, Tuesday, October 27, 2020, the Lafayette Police Department responded to a report of vandalism in an area of the city adjacent to Lafayette Circle. The Suspect(s) had spray-painted a swastika and the word "Trump" on the garage of a home.

"There is no place for hate in Lafayette," said Mayor Mike Anderson. "This is an inclusive and diverse city where everyone is welcome. The spray-painting of a swastika, a symbol of oppression, genocide, and xenophobia, on an individual's home will not be tolerated," said Mayor Anderson.

"Lafayette stands together in the face of any act involving prejudice or racism; this act will not be overlooked and will be vigorously prosecuted," the Mayor added.