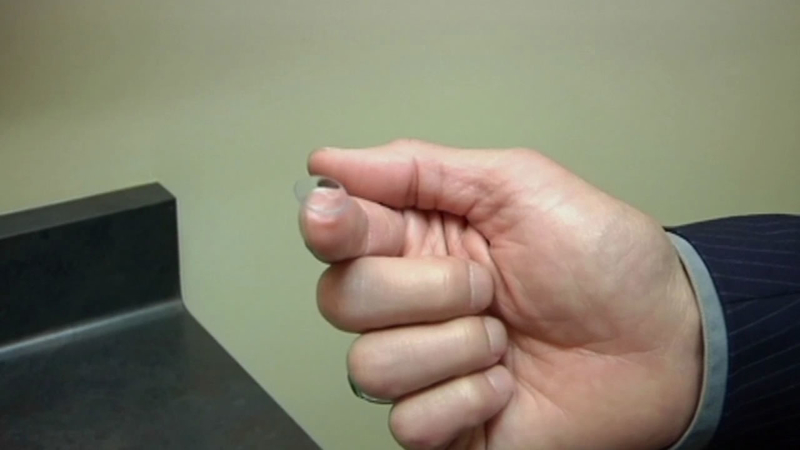 SAN RAFAEL, Calif. (KGO) -- If you wear contact lenses, you know that putting them in and taking them out is only part of the routine. Forget to clean them and you could expose your eyes to bacteria and fungus that can cause serious infections.

"And these infections could range from a simple corneal ulcer to a severe fungal infection that can make someone go blind," Dr. Kathryn Najafi-Tagol said.

Najafi-Tagol is an ophthalmologist in San Rafael and Vice President of Medical Affairs at Bay Area-based NovaBay. The company has just won FDA approval for a high-tech device called the Intelli-case, designed to disinfect contact lenses in a safer way.

"It determines when it's safe for patients to use the contact lens, and that's a major advancement in contact lens care," Najafi-Tagol said.

The case works with hydrogen peroxide. Developers say it's been the gold standard for killing dangerous bacteria but fell out of favor over the years because of safety concerns.

"If you get a little hydrogen peroxide left on your lens and you insert it into your eye, you get a burn," NovaBay's Dr. David Stroman said.

To avoid the danger, a computer chip inside the Intelli-case analyzes the chemical balance of the hydrogen peroxide to make sure it's been neutralized by the end of the cleaning process. A light on the case switches from yellow to green when it's safe to remove the lenses. If there's a problem and you use the wrong solution or the catalyst has gone bad, or any reason, the red light will blink.

The company plans to begin selling a limited number of the Intelli-case cleaners through doctors' offices by the end of the year.