KGO
A growing number of women are raising concerns about a form of birth control developed in the Bay Area. Some are demanding it be pulled from the market, despite reassurances from both the manufacturer and the FDA that the device is safe.

Bay Area nurse Gaby Avina was not just an early recipient of the Essure contraceptive implant, she ultimately became an advocate. However, even as she spoke on behalf of the company about the benefits of Essure, Avina says she began to experience health problems, including fatigue and auto-immune disorders. 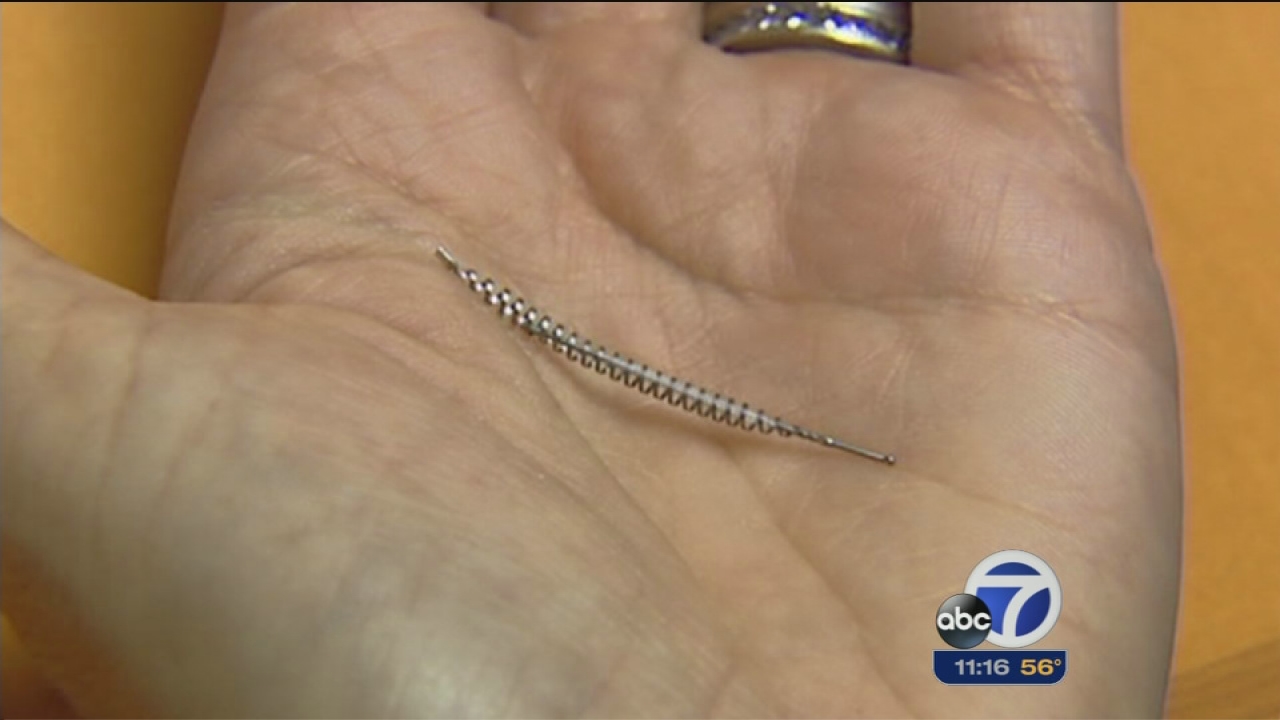 Some want Essure pulled off market
Many complaints continue to come into patient websites about the birth control device Essure and say it should be pulled off the market.

"We believe it to be originating from this foreign device that's been there for 14 years," says Avina.

ABC7 News first profiled Essure shortly after its development by Mountain View-based Conceptus. Once implanted, the coil-like device is designed to promote scarring to block the fallopian tubes, creating a permanent form of birth control. But since that time, more and more patients have come forward on dedicated websites, claiming the device has triggered side effects ranging from pain to allergic reactions.

"There's about 7,000 women in this group and all those women are having issues with their health. As coincidentally, timing it with having the Essure device implanted," says Avina.

One of the most common concerns centers on an allergic reaction to the nickel alloy used in the device.

Dr. Jennifer Chen is an Associate Professor of Dermatology at Stanford Hospital and is not involved in the Essure complaints. She says nickel-titanium alloys are used in a wide variety of medical implants, but can sometimes causes rashes and other side effects in a limited percentage of cases.

"People are allergic to implants at times. Sometimes patients will complain of inching or pain around the site of the implant," says Chen.

The risk to patients with metal allergies was originally listed as a contra-indication for Essure, describing women who might not be optimal candidates for the device. While it's still appears as a warning in the patient literature, Bayer Healthcare, which now owns the company, says current allergy tests aren't a reliable predictor of who might have a reaction.

"Some women who may have a positive skin test do not have any reactions or have not reported any reactions with Essure in place and vice versa," according to Bayer Medical Officer Dr. Edio Zampaglione.

In a recent review, the FDA examined nearly 1,000 complaints, including allergic reactions and cases of the implant migrating to a different area of the uterus. The agency said it found, "No new safety problems or an increased incidence of problems already known."

The company also points out that hundreds of thousands of women have successfully received the implant.

"The Essure implant is safe, this has been confirmed by the FDA looking at our clinical trials, looking at the five year data that was submitted to them as part of the approval agreement," says Zampaglione.

Still, complaints continue to come into patient websites including women who say they've been forced to undergo reversal surgeries to remove the device. Avina says she's scheduled to undergo surgery this week and now believes the device should be removed from the market until the safety concerns are better understood.

"I think the device has a reason, has a purpose and can be effective, but if all the pieces of that puzzle don't come together correctly, there can be some terrible, terrible fallout from that," Avina said.

The Essure device is also approved in Canada and is about to begin clinical trials in Europe. The American College of Obstetricians and Gynecologists has compared data on the effectiveness of Essure versus other methods of birth control, but has no current advice regarding the complaints collected on patient websites.
Related topics:
health & fitnesssan franciscowomen's health
Copyright © 2021 KGO-TV. All Rights Reserved.
TOP STORIES
1 dead, 2 injured after truck crashes into SJ outdoor dining area
Cal/OSHA proposes new workplace guidelines ahead of next week's vote
How Native Americans took over Alcatraz and ignited a movement
East Bay city offering reward money for reporting illegal fireworks
CA announces 'Vax for the Win' winners
Grass fire burns nearly 100 acres, destroys structure near Travis AFB
Poll: What do you think about California's reopening?
Show More
Man steals then returns signatures for SF school board recall
Father of SJ boy whose body was found in Vegas honors son at vigil
What to expect from CA's June 15 reopening
Gov. Newsom, California lawmakers to get pay raise in December
VTA documents: Shooter had history of insubordination, conflict
More TOP STORIES News