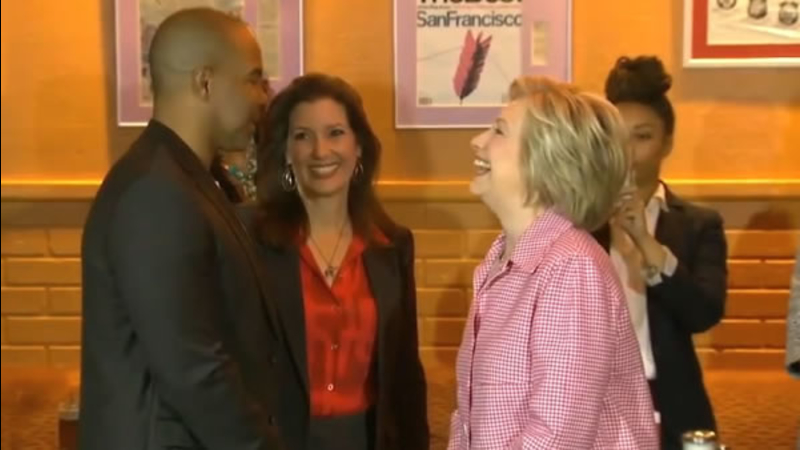 Candidate Hillary Clinton's convoy pulled up to the rear of the Home of Chicken and Waffles, avoiding the hundred or so supporters outside and the handful of supporters for her opponent, Bernie Sanders.

Clinton attracted a relatively small crowd outside the restaurant on West Embarcadero and Broadway, across the street from Jack London Square. Inside, Clinton said this visit was all about Oakland.

"I want to be a champion for Oakland and all the Oaklands of America. Places that have challenges like any other part of our country, but, places that are coming together," said Clinton.

She met with a panel that includes religious, education and business leaders, along with Oakland Mayor Libby Schaaf, a Clinton supporter, who had a few requests to make.

"I asked for more flexibility in spending federal funds, particularly when we try to help people make more positive life choices. They face a variety of barriers so one size doesn't fit all," said Schaaf.

Several other community leaders took part in the discussion, including the city's superintendent of schools and the leader of the East Oakland Youth Development Center.

Recently, Donald Trump made headlines for calling Oakland one of the most dangerous places in the world, a comment that received a sharp rebuke from Schaaf and Clinton.

"I want to be a champion for Oakland and all the Oaklands of America, places that have challenges like any part of our country and any kind of human endeavor. But places that are coming together. We are stronger together when we work together," Clinton said.

Working with Bernie Sanders supporters may prove to be a great challenge to Clinton. A few protesters showed up outside the event.

"The Democrats will likely unify soon, but it's really important that concessions are made," Sanders supporter Ajit Smith said.

Clinton has watched what was once a big lead over Bernie Sanders shrink from double digits to just a couple of points, with the California primary a week and a half away on June 7.

Volunteers at Sanders Oakland campaign headquarters think he has a chance to win it, but some have a backup plan if he doesn't.

"I think a third party is another option. I think a lot of people would go Independent if Sanders chose that route," said one Sanders' supporter.

Clinton's next scheduled appearance in California is June 6, the day before the primary election.

A Bernie Sanders supporter outside a Hillary Clinton event in Oakland. pic.twitter.com/vJEhLut9tz

Broadway blocked off at Jack London Square because of Hillary Clinton visit. pic.twitter.com/uEiTu88tHS