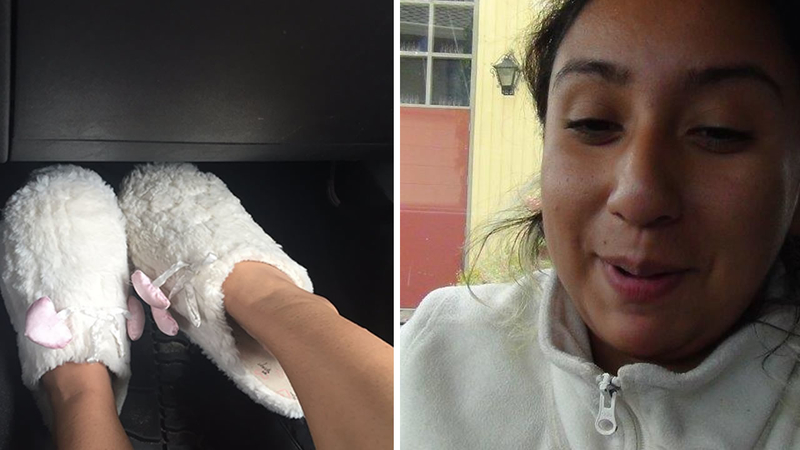 RICHMOND, Calif. (KGO) -- The young woman at the center of a police sex scandal that's spread to at least seven law enforcement agencies in the Bay Area says one police department tried to get her on a plane Wednesday night to Miami for a 33-day stay in rehab. That's raising all sorts of questions, and the I-Team's Dan Noyes has the exclusive story.

The 18-year-old who calls herself Celeste Guap has been up front with how she makes her money, and about the serious drugs she uses. She admits she's addicted and sometimes thinks about quitting. The Richmond Police Department Wednesday tried to get her into rehab, but some are questioning whether their motives are pure.

A Richmond police sergeant brought Guap to the Family Justice Center. She said he was in a hurry and didn't give her time to put on shoes. She wore her bedroom slippers. He tried to put her on a plane to Miami Wednesday night.

Noyes: "So what did they say today?"
Guap: "That I have to go to rehab."
Noyes: "And they're trying to get you to go when?"
Guap: "Tonight, they said it was a paid vacation, to consider it a paid vacation."

Guap said in past I-Team reports that she's had sex with more than 30 officers, sergeants, lieutenants and captains from seven different agencies -- a few paid, most did not. And several of those cases could turn out to be statutory rape. The investigations are underway.

Guap says she's still in contact with several officers, and they question the motivation of the Richmond Police Department trying to send her across the country, when there are good rehab facilities in the Bay Area.

Noyes: "But do you think they're sending you away for another reason besides rehab?"
Guap: "They want to shut me up... Somebody familiar with the situation said that they're just trying to shut me up."

Richmond police Chief Allywn Brown did not respond to emailed questions about who would pay for the rehab, why not in the Bay Area, and why send a witness in several investigations across the country. He wrote: "We did reach out to her separate and apart from our personnel investigation through Family Justice Center staff with the intent to get her connected to services that could help, because it was apparent that she might benefit. We cannot comment further."

Celeste informed the Richmond Police Department that she might go to rehab next week, but she says, she doesn't think she'll go. I also know she's speaking with a prominent attorney about possibly filing a lawsuit against the various departments, especially those whose officers may have committed statutory rape.