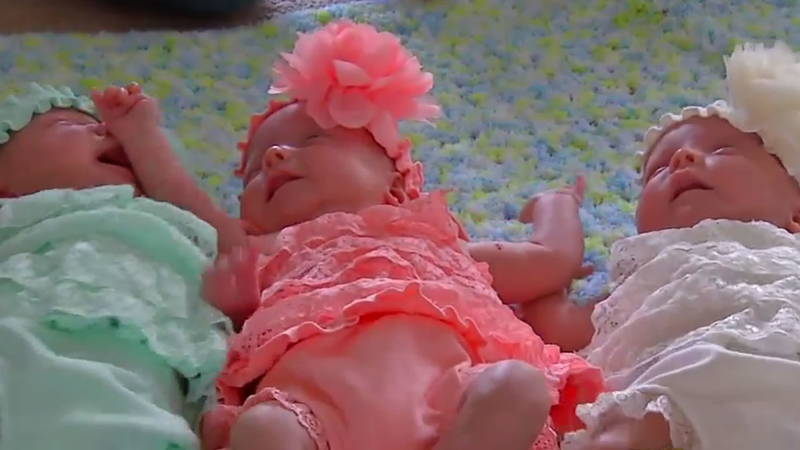 These triplets in North Carolina are one in a million

WAKE FOREST, N.C. -- The Fradel family recently welcomed triplets - three little girls, all of them identical, a one in a million phenomenon.

The Fradel girls, Grace, Stella, and Emily, were born a little more than a month ago and they're natural identical triplets, something that is very rare.

The family is able to tell them apart by painting each girls' toenails a different color. Also, all three have the same birthmark, but each one has it in a different spot.

The parents, Gavin and Kimberly Fradel, said they were totally shocked when they first found out. 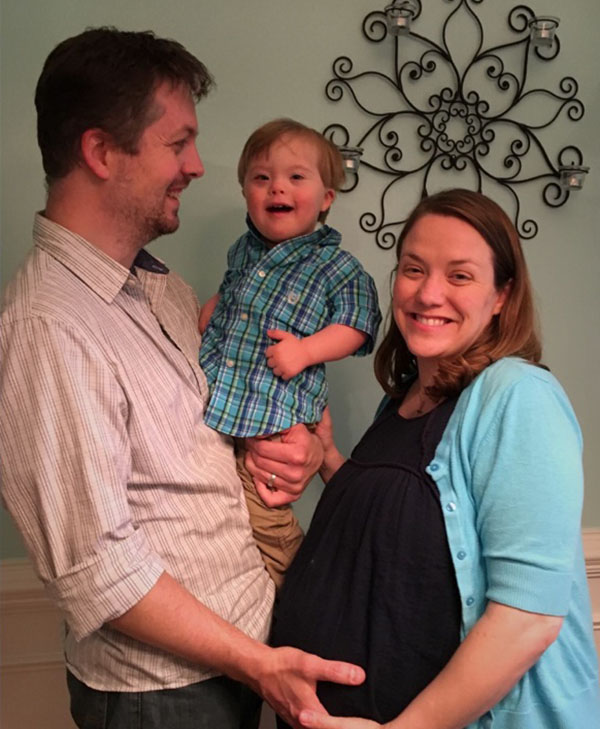 The Fradels have a 2-year-old son, Gavin Jr., who has Down syndrome. They were going for child number two when they received the news. Kimberly went in for her eight-week ultrasound while her husband took their son to a doctor's appointment.

"I almost fell off the table," Kimberly said.

"And for her it was really great to see and exciting. For me, the excitement came, but my first feeling was sheer panic," Kimberly said.

Having multiples is considered a high-risk pregnancy, and while the idea of managing so many children induced anxiety at first, the Fradels said their family, friends, and neighbors really stepped up to help. 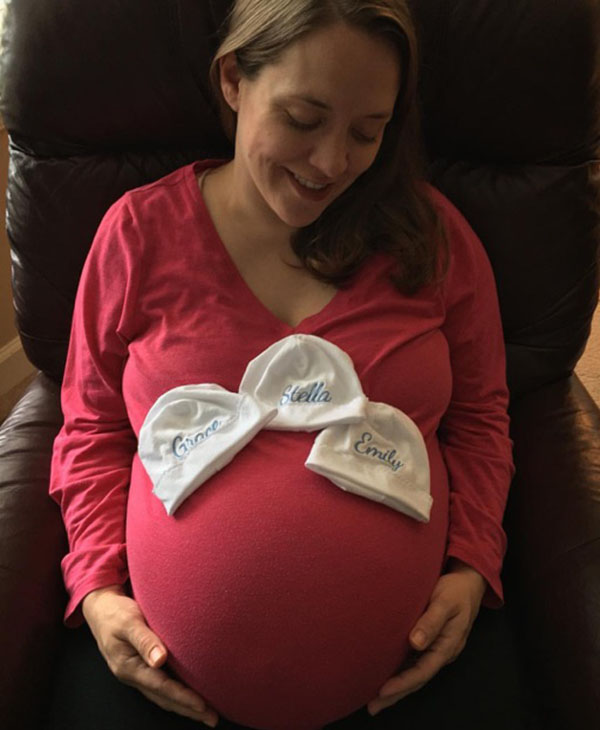 They said they feel truly blessed to have such a supportive community rallying around them.

"I think we adjusted, because you do," Kimberly said. "We knew in our hearts that there was a plan for us and we've learned several times in our marriage that sometimes the plan that you have isn't the plan that God has, and sometimes, always, his plan is a lot better."

"And once we got over the initial shock and we received so much love from people, and I had a very supportive employer who, we both have had very encouraging employment situations, that we just felt like, 'OK we can do this.' We're not doing it by ourselves. We're doing it with the community, and a community of people who love us, love our children, and the support has just made it OK."

"I also had a really supportive husband and I think probably for six or seven months that I was pregnant, which is pretty much the whole pregnancy, he was mom and dad, and cook, and student, and so he pretty much did everything because I could do very little," she said. 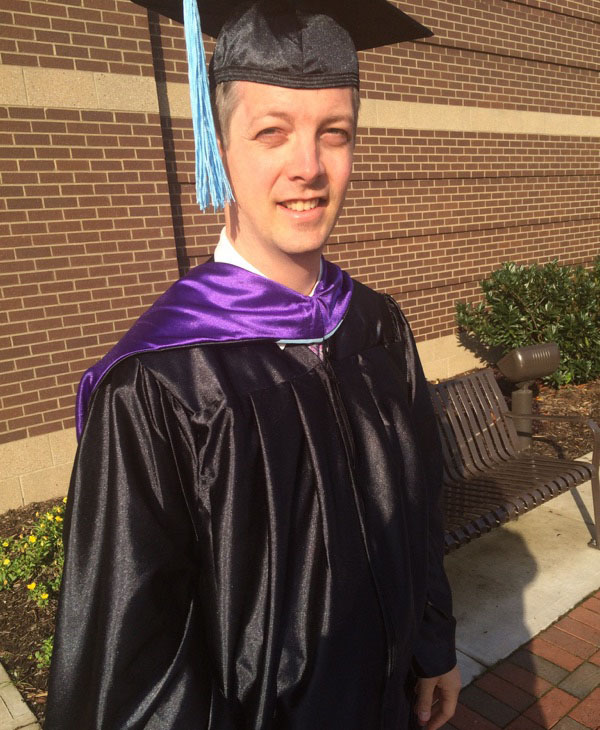 Gavin Sr. is a Wake County school teacher and was in the middle of online classes toward his master's degree in science education from East Carolina University when Kimberly became pregnant.

His graduation was the very next day after she gave birth.

"I was there for the C-section and the birth," he said. "And my wife encouraged me, she said 'you need to go march, Saturday ... go to Greenville, get your degree, this is what you've worked for.' So I drove to Greenville, had the three father bands on my wrist for my bling, and I marched and got my diploma."

Gavin was teaching a class when he received the call that his new daughters were on the way. 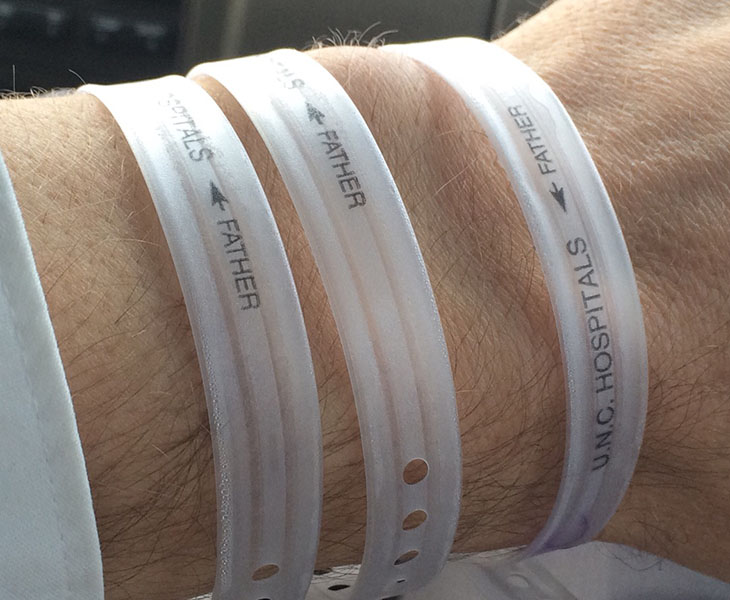 "My students all had an idea of what was going on the whole year," he said. "They knew that my wife was pregnant with triplets, and as soon as they saw me pack my bag, they were like 'where's Mr. Fradel going?' I told the kids, I said 'I got to go to the hospital' and they started cheering, and it was pretty neat to have that reaction," he said.

The Fradels said although the triplets keep them busy around the clock, they feel overjoyed at their arrival because of the sibling bonds they can already see forming amongst the girls, but also with their son.

"Life with triplets? They keep you busy," Gavin Sr. said. "It's an assembly line as far as diaper changes and feedings go. The only thing I wish I could do more of, and I'm sure my wife could agree is, be able just to hold them. Like with our son we were able to hold him because he was the only child, hold him a lot. You need to share the amount of time that you can hold each girl.

"But it's funny because they seem to not mind because there's three of them and they sort of, they hang out together. They're each others' friend already. This early we can tell that they're going to have each other throughout this life which is really good.

"And they'll be with our son when we're no longer here anymore. They'll take care of each other, which is a blessing, and we've always wanted to have another child to be with our son as they both get older."

Gavin Jr. wasn't so enthusiastic at first, though.

"When we got home from the hospital ... as soon as he saw them he said 'Daddy, take them back,' and he said it twice," Gavin Sr. said. "I have no idea where he even got those words from or where he started saying that, but that was his first reaction, and it was hilarious. It was funny."

Mom said the big brother has come around.