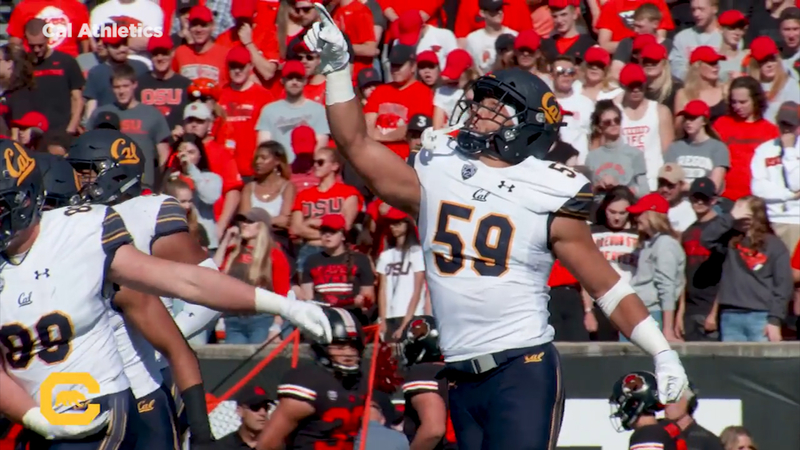 BERKELEY, Calif. (KGO) -- Jordan Kunaszyk has played the linebacker position for the Cal Golden Bears with more than just pads on his shoulders.

Many see him as the non-prototypical linebacker, especially when it comes to speed.

But what Kunaszyk may lack on a stopwatch, he more than makes up with his mind.

"My intelligence allows me to play faster and be a better football player," Kunaszyk said. "If I didn't develop that intelligence and football IQ, I don't think I would've had the season that I have and be quite the player that I am today."

The football IQ lead to production at Cal in the three seasons he played for the Golden Bears.

In 34 games, he started 19 games and totaled 273 tackles to rank eighth on Cal's all-time list.

148 of those tackles came in his senior season.

Combine those numbers with 11 tackles for loss, four sacks, five forced fumbles and three pass breakups and you see that "speed" may not mean everything.

"When you watch the film, you're going to see someone who knows what he's doing," Kunaszyk said. "You'll see someone who is running the defense and setting up everybody."

His stat-packed senior season earned him first-team All-PAC-12 honors as voted on by the conference's coaches as well as a spot on the second-team All-America list.

The mix of production, skillset and notoriety makes him a draft prospect.

But clearly not everyone thinks that way.

Kunaszyk did not receive an invite to participate in the 2019 NFL Scouting Combine.

In fact, neither did his Cal counterpart Patrick Laird or any of his Cal teammates.

This just built the chip on his shoulder up even more.

Kunaszyk performed well at his Pro Day and received invites to participate in the 49ers and Raiders local Pro Days.

Putting their skills on display. Thanks @Raiders for having our guys out! #BayAreaUnite // #EarnIt // #ProBears pic.twitter.com/QnrfNnkwF2

His draft status is uncertain, but his attitude isn't.

Kunaszyk knows that he can produce in the National Football League.

He has a message to NFL General Managers that may consider adding him to their team.

"When you watch the film, you're going to see someone who knows what he's doing," Kunaszyk said. "You'll see someone who is running the defense and setting up everybody."