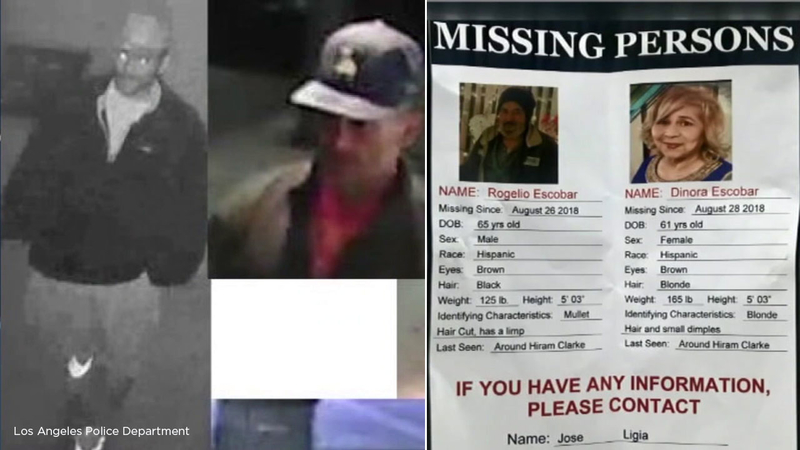 SANTA MONICA, Calif. -- A man identified as the suspect in the murder of two homeless men in Los Angeles may also be connected to the disappearance of two of his own family members in the Houston area, police sources say.

Ramon Escobar was arrested Monday in connection with a series of baseball bat-beatings of homeless men as they were sleeping on the streets of downtown L.A.

Eyewitness News has learned Escobar is wanted in connection to the disappearance of two siblings in the Houston area last month.

Rogelio and Dina Escobar went missing in August within days of each other. First Rogelio disappeared and then Dina went missing a few days later when she went to look for her brother.

Sources say Dina is Ramon's aunt and Rogelio is his uncle.

Ramon's exact connection to their disappearance has not been detailed. Los Angeles police are expected to hold a press conference Tuesday to discuss the case.

Two homeless men who were viciously beaten by a baseball bat as they slept in downtown LA have died and the suspect remains at-large.

Dina's daughter spoke to ABC7's sister station KTRK in Houston not long after her mother's disappearance.

"We're trying to hang in there. We just have a really bad feeling. This is not something normal. They wouldn't be gone this long. They wouldn't not contact us," said Ligia Salamanca.

Family members said they have not heard from Ramon since the disappearances but said he did stop taking medication for mental illness around that time.

Earlier Monday, police announced the arrest of Ramon. The 47-year-old was booked for murder and is being held without bail, the LAPD said in a press release. The arrest came when officers from the Santa Monica Police Department found a man suffering from blunt-force trauma in the 1500 block of 7th Street shortly before 7 a.m. The victim was rushed to the hospital in unknown condition. After a search of the area, Ramon was found in the 600 block of Broadway Avenue and placed under arrest for the Santa Monica assault.

Upon an ongoing investigation, Los Angeles police said they believe Ramon is also the man who used a baseball bat to attack three separate homeless victims - all sleeping on downtown L.A. streets - on Sept. 16. Two of those victims died.

Los Angeles police announced Monday that they believe they've arrested the man responsible for the murder of two homeless men in DTLA.

Police said the suspect approached the sleeping homeless men and beat them repeatedly on the head and shoulders with a baseball bat, then ransacked their pockets and belongings to rob them.

Santa Monica police said they are looking at whether Ramon is responsible for three other Santa Monica cases of men being assaulted and suffering blunt-force trauma. One of those victims died.

The first attack happened on Sept. 8 in the 1800 block of Santa Monica Beach. A homeless man was attacked while he was asleep. He suffered blunt-force trauma and has been released from the hospital, police said.

The second attack in Santa Monica was just two days later. A homeless man was sleeping on the beach when he was attacked. Police said he remains in critical condition from blunt-force trauma.

On Sept. 20, a man who was sleeping under the Santa Monica Pier was found suffering from blunt-force trauma as well. The victim died under similar circumstances, police said. There's no surveillance video and no witnesses of the incident, which makes it the hardest of the three to connect to the suspect, police said.